Rebels hang on to deny Highlanders 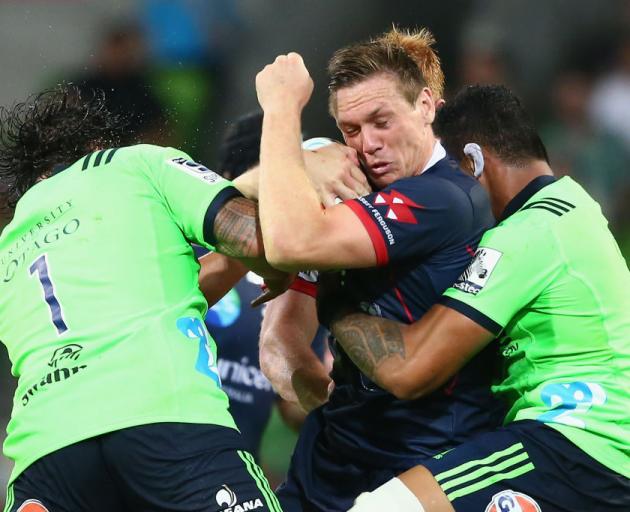 Dane Haylett-Petty of the Rebels is tackled during the round three Super Rugby match between the Rebels and the Highlanders. Photo: Getty Images

But the Rebels had to produce some desperate defence in the final moments to deny the Highlanders a try which could have helped the visiting side tug away victory on a sticky night in Melbourne.

Highlanders loose forward Shannon Frizell knocked the ball on while trying to muscle through two tackles.

Had he got the ball down cleanly, the Highlanders could have won the game with a successful conversion.

But the replay showed a clear fumble and the Rebels held on to win 24-19.

It was their first win against a New Zealand team since 2015 and just their second against the Highlanders.

The mercury was still registering 32degC at kick-off - sweltering and foreign conditions for the Dunedin-based team.

But the Highlanders struck first through Frizell. The big blindside was waiting on the left wing and Bryn Gatland, in his debut for the franchise, provided an accurate cross kick.

Frizell scooped it up and crashed over.

The Rebels replied when Tom English slipped over for the first of his two tries in the 10th minute. A couple of defensive errors by the Highlanders cleared the path to the line.

But the Highlanders still had plenty of ball at that stage and lock Jackson Hemopo set up his side's next. He hauled in a lineout and prop Siate Tokolahi was driven over in the maul.

Hemopo was having a huge half but the Rebels seized control of the ball and kept it for long periods. Quade Cooper got off a lovely pass and Jack Maddocks burst through a hole after about 11 phases.

Not long after, the Highlanders kicked aimlessly and the Rebels swung on to attack again.

Billy Meakes flicked a flat pass inside to English and he went over for his second.

The Rebels extended their 19-12 halftime lead shortly after the break when a horrific bounce eluded Gatland but not Meakes.

Cooper had stabbed the kick ahead and was having a big influence on the match. He was getting quick ball from halfback Will Genia and the Highlanders midfield was not as organised as it needed to be.

Like they did against the Chiefs and then the Reds, the Highlanders' revival instincts kicked in.

Marty Banks replaced Gatland at first five-eighth and he used his boot to win the game of force-back. It was a seemingly small win but the Highlanders desperately needed the territory.

They stacked up some possession at the right end of the field and Hemopo drove over for a hard-earned first Super Rugby try.

Banks drilled the conversion and the game was back in the balance.

But it was a mistake in the Rebels' midfield which presented the Highlanders with a final opportunity to win.

They strung 18 phases together in the search for a try.

And as Frizell lunged towards the line it appeared as if the Highlanders might have done it again. The replay suggested otherwise.

In last night's other game, the Hurricanes thumped the Brumbies 43-13 in Wellington.