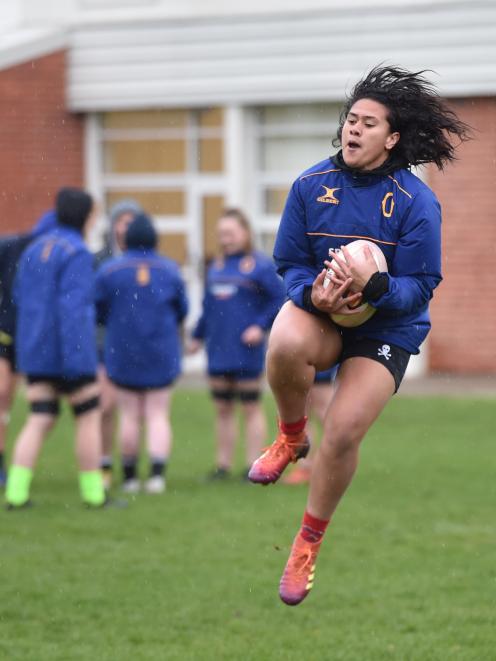 Every time she got close, fate intervened.

She was all set to join the Black Ferns on their European tour in 2018 but got injured during a training camp.

Then earlier this year she was ruled out of the series in the United States.

But the 21-year-old persevered and finally got to run on in the black jersey in the test against the Wallaroos in Perth on August 10.

She came off the bench with about 13 minutes remaining. It all went by in a flash.

''Words can't really explain it,'' she said when asked about the experience.

''Once you pull on that jersey it is a different feeling. My parents weren't there which was a shame. But I knew they were saying prayers for me.''

Moata'ane had a simple brief - take the ball into contact hard.

An ankle and a knee complaint scuppered earlier opportunities

''I always had [team-mates] who would pick me up and I had my family who knew I wanted to give up every time it happened.

''All the hard work it took you to get to that point and to have that happen was not a good feeling.''

Moata'ane has a wider role with the Otago side. The Spirit has a lot of talent in the wide channels in Trisha Hopcroft, Kiana Wereta and Sheree Hume, so she has been working on her distribution skills.

They will come in very handy in the championship final against Hawke's Bay at Forsyth Barr Stadium this weekend.

Hawke's Bay has a bigger pack and the Spirit will be looking to run them around. That means getting the ball wide quickly.

Otago has played some sparkling rugby and its 64-10 demolition of Tasman in the semifinal in Dunedin on Saturday was a tremendous dress rehearsal.

Moata'ane, who is a teacher aide at Otago Girls' High School, had picked up a concussion and missed that match. But she is symptom-free and will bolster the midfield.

The game is on a Sunday and for the deeply religious Moata'ane, who grew up in Dunedin and went to Kavanagh College, it meant making a tough decision about whether she would play.

She has decided to make herself available for selection and will be one of the first players on the team sheet.