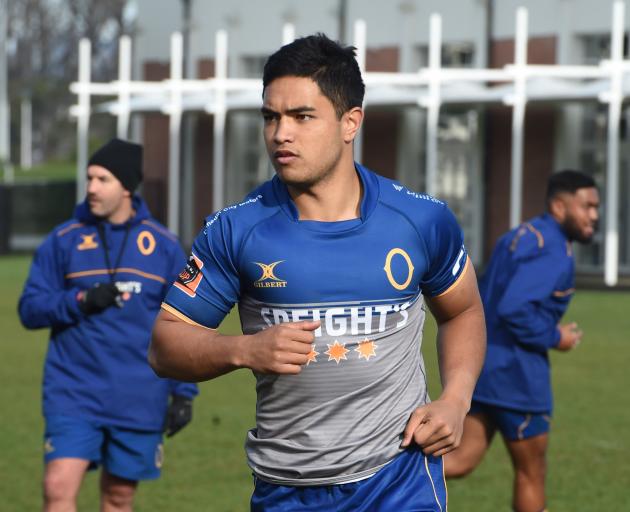 Josh Ioane trains with the Otago squad last season. Photo: Gregor Richardson
All of a sudden, getting back up to the top echelon has become a tad harder for the blue and golds.

Otago has been stuck down in the Championship division of the national provincial competition since the division was split into two in 2011.

It has been to three finals, losing them all, and missed the top four only once since 2012. But it is still stuck in the Championship and it looks like it is going to be much more difficult to win this season.

When — and if — rugby gets up and going this season, there appears to be a high likelihood All Blacks will come back and play in the Mitre 10 Cup.

Playing international rugby may be a bridge too far as countries will have hard borders and not let anyone in. So an All Black-laden national provincial competition may be a beneficiary.

Otago would welcome back hooker Liam Coltman, who played just the one game for Otago last year. Inside back Josh Ioane, an All Black last year, would also be available as would speedster Vilimoni Koroi, who is no longer going to the Olympics with the sevens programme.

A wild card could be Ben Smith. He was expected to head to Japan after a season in France but that appears to have gone out the window. He may come back to New Zealand although the French Top 14 league has only been suspended.

Last year’s Otago coach, Ben Herring, had gone to the United States on a year-long break with his family. But he is back in New Zealand, having cut the family trip short for obvious reasons, and is now believed to be living in Piha.

Otago may have some exciting talent but then so would everyone else in the Championship.

Taranaki could have the three Barrett brothers — Beauden, Jordie and Scott — and would also have plenty of Super Rugby talent to call on. It would also have halfback Te Toiroa Tahuriorangi.

Manawatu would be boosted by having second five-eighth Ngani Laumape and halfback Aaron Smith. Laumape was outstanding for Manawatu last year when he played for them. The likes of Otere Black and Rob Thompson would also be useful.

Northland would warmly welcome centre Jack Goodhue while Counties-Manukau would have Nepo Laulala and Dalton Papali’i.

In the top division, Canterbury would be the favourite to top the lot as it welcomes players such as Richie Mo’unga and Codie Taylor while Wellington and Auckland would also be strong.

For years, critics have said interest in the provincial competition has waned because of the lack of All Blacks. But with no crowds likely to be allowed there may be no clear gauge on whether their return has any impact.