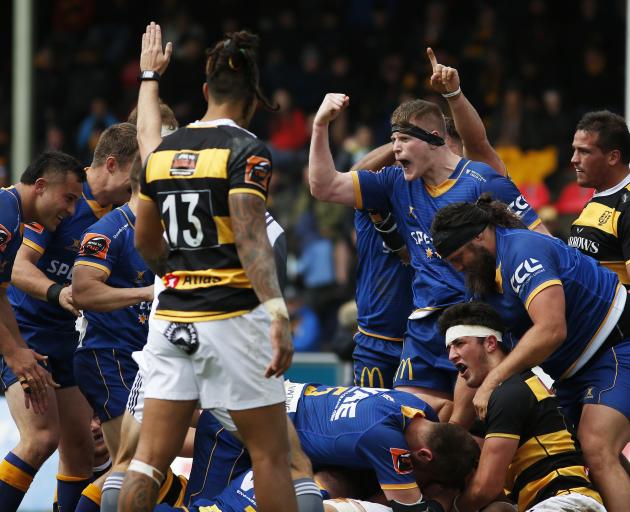 Otago players celebrate Liam Coltman's try during their victorious Shield challenge in Taranaki. Photo: Getty Images
Otago will not have long to celebrate before its first defence of the Ranfurly Shield.

Otago won the Ranfurly Shield earlier today after it beat Taranaki 30-19, having led 22-5 at the break.

Otago had expected to struggle against a Taranaki side which had beaten Canterbury last week to win the shield.

But Otago dominated the game at Inglewood. It scored three tries in the first half with the breeze behind it and when Josh Ioane went over to score a try just before the end of the third quarter of the game, Otago was well ahead.

Taranaki tried to fight back but made too many errors and struggled on the heavy ground.

Otago's first defence will be against Hawke's Bay next Sunday at Forsyth Barr Stadium.

In 2013, when Otago won the shield after a 56 year drought featuring many close and sad losses its first challenge after just nine days was against Hawke's Bay.

The Bay side came calling and managed to sneak a 20-19 win in front of a packed crowd at Forsyth Barr Stadium.

It would be looking to stay more error free next Sunday and hoped a big crowd would come along. Hawke's Bay had a big won of its own this weekend, beating Canterbury at McLean Park for the first time in 37 years.

Donnelly was very proud of his side in its win over Taranaki and the team played exactly the way it needed to, staying focused and everyone working hard.

There was no serious bangs and injuries from the match. The side would fly out of New Plymouth at 6.30am tomorrow and is scheduled to arrive at Dunedin International Airport at 10.30am tomorrow.