Performance to forget from Otago in capital 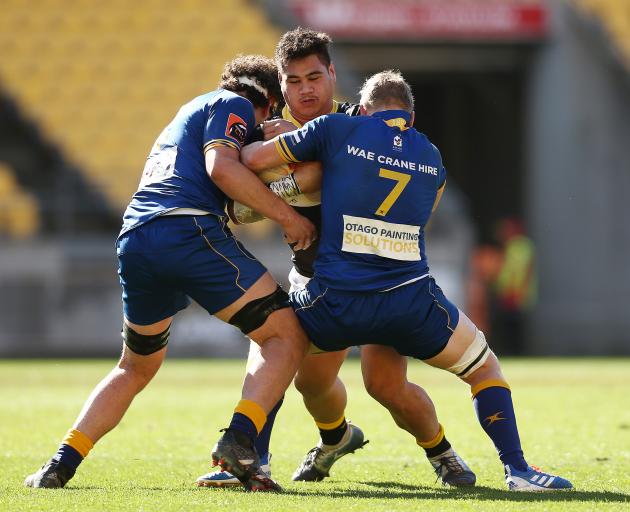 Wellington's Alex Fidow is caught in the tackle of Otago players Josh Hill (left) and James Lentjes during their Mitre 10 Cup game at Westpac Stadium in Wellington yesterday. PHOTO: GETTY IMAGES
Otago is not focusing on home games but it appears to have the travelling blues.

A week after a pulsating Ranfurly Shield defence, Otago put on a performance to forget when it crashed back to earth against Wellington yesterday. Otago went down 54-24 in the capital and has lost all three games away from home.

It lost yesterday's game through giving away the advantage line and missing countless tackles.

The official missed tackle tally was 23 from Otago but it seemed a lot more.

The side did manage to come away with something as it scored two tries in the final 10 minutes of the game to pick up a four-try bonus point, which in all honesty, it hardly deserved.

Wellington retained the Mike Gibson Memorial Trophy with the victory.

Otago made a terrible start in what was a poor display from both sides.

Wellington dropped the kick-off but managed to clear the ball. It was kicked back to Otago and went into the hands of Josh Ioane.

Ioane somehow passed the ball into the back of retreating Otago second five-eighth Harumichi Tatekewa. The ball bounced away and was picked up by Wellington winger Wes Goosen, who ran away to score, with 36 seconds gone.

That was an indication of how things would go for Otago.

Otago coach Ben Herring said the side just did not turn up in the opening stages.

"We missed a level of physicality in that first 20 minutes and once you do that against a side like them they get their head up and they're away," he said.

He said it was unclear whether the win last week against Taranaki had taken a lot out of the side, but the team was keen to perform away from home and was certainly not concentrating on just home games.

"There is something missing there but it is a not a big issue. We just need to work it out and get on top of it."

Josh Timu had to leave the field with a head knock, while Kayne Hammington injured his toe and Jona Nareki did some minor damage to his hamstring.

Otago was down 35-5 at the break and when it conceded early in the second half, things looked really ominous and a cricket score seemed possible.

But some energy off the bench in the form of loose forward Mika Mafi and captain and fullback Michael Collins stiffened up Otago and it got back into the match. Wellington lost shape as bench players got on and the aggression went out of the home team.

Mafi scored the fourth try for Otago after the hooter had gone, to pick up a competition point which could be vital at the end of the regular season,

Mafi was strong when he came on and Vilimoni Koroi made some nice moves on the right wing but it was one to forget all round.

Otago heads to North Harbour this Saturday night in what is expected to be an important game.

In other games, Bay of Plenty beat Taranaki 31-17 in New Plymouth while Auckland pulled away from Counties-Manukau 28-13 in Pukekohe.

In the late game yesterday, Tasman retained its unbeaten record, seeing off North Harbour in Nelson, 21-17.