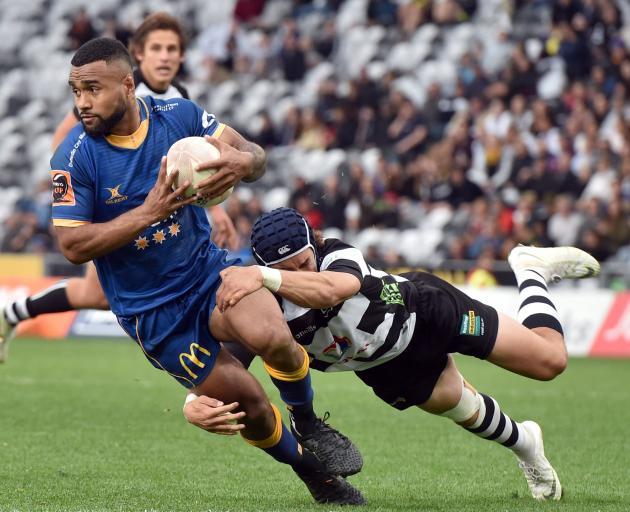 Otago winger Joan Nareki is tackled by Hawke’s Bay replacement back Caleb Makene during the Ranfurly Shield match at Forsyth Barr Stadium in Dunedin yesterday. PHOTO: PETER MCINTOSH
The Ranfurly Shield is on the move again.

The defenders were unable to build any second-half pressure and fell victim to a couple of magic moments from the Magpies.

Hawke’s Bay is the third team to stage a successful heist this season.

Taranaki defeated Canterbury last month but promptly lost it to Otago in its first defence.

Otago then suffered the same fate. Hawke’s Bay will be hoping to avoid that outcome when it hosts Northland at McLean Park on October 16.

Otago’s defence actually got off to a positive start.

The home team dominated but came away with so little reward.

First five-eighth Josh Ioane drilled a couple of penalties. But raid after raid on the Hawke’s Bay line came up empty.

The Magpies had been denied possession, territory and any meaningful opportunities until they pounced with a magical team try towards the end of the spell.

Hawke’s Bay worked it through the middle of the field and swung it right to Lincoln McClutchie, who got in a half gap and offloaded.

The space suddenly opened up for Highlanders back-up halfback Folau Fakatava, and underemployed winger Lolagi Visinia was on hand to provide the finish.

Otago went into the break trailing 7-6 despite having had the better of the opening 40 minutes.

It fell further behind when Fakatava caught the defence napping from a quick tap and weaved his way to the line.

He barely had a finger laid on him during the 20m run unless you count the palm of his hand swatting away a defender.

Ioane landed a penalty to keep Otago in touch.

But the defender’s grasp on the Log O’Wood loosened further when fullback Vilimoni Koroi picked up a yellow card for taking out Caleb Makene while he was in the air.

While he was off the field, robust lock Isaia Walker-Leawere burst on to a short pass and thundered 20m to score with 15 minutes remaining.

It was quite a sight watching the big man in full stride.

Otago openside Slade McDowall got a red card late in the game for a swinging arm in a tackle and will face the judiciary.

Otago winger Jona Nareki presented a threat each time he carried the ball. The home team looked at its most potent when he played the game at pace.

But Hawke’s Bay was successful in slowing the tempo of the game. And the many, many turnovers also robbed the match of some flow as well.

Otago coach Tom Donnelly declined to be interviewed after the game.

In other results, Bay of Plenty lost 20-16 to Auckland in Rotorua, Counties Manukau edged Manawatu 36-30 in Pukekohe, Northland tipped up Taranaki 35-25 in Whangarei, Canterbury beat Wellington 31-26 in a golden-point match in Christchurch and North Harbour ended Tasman’s winning streak with a 40-24 victory at North Harbour Stadium.