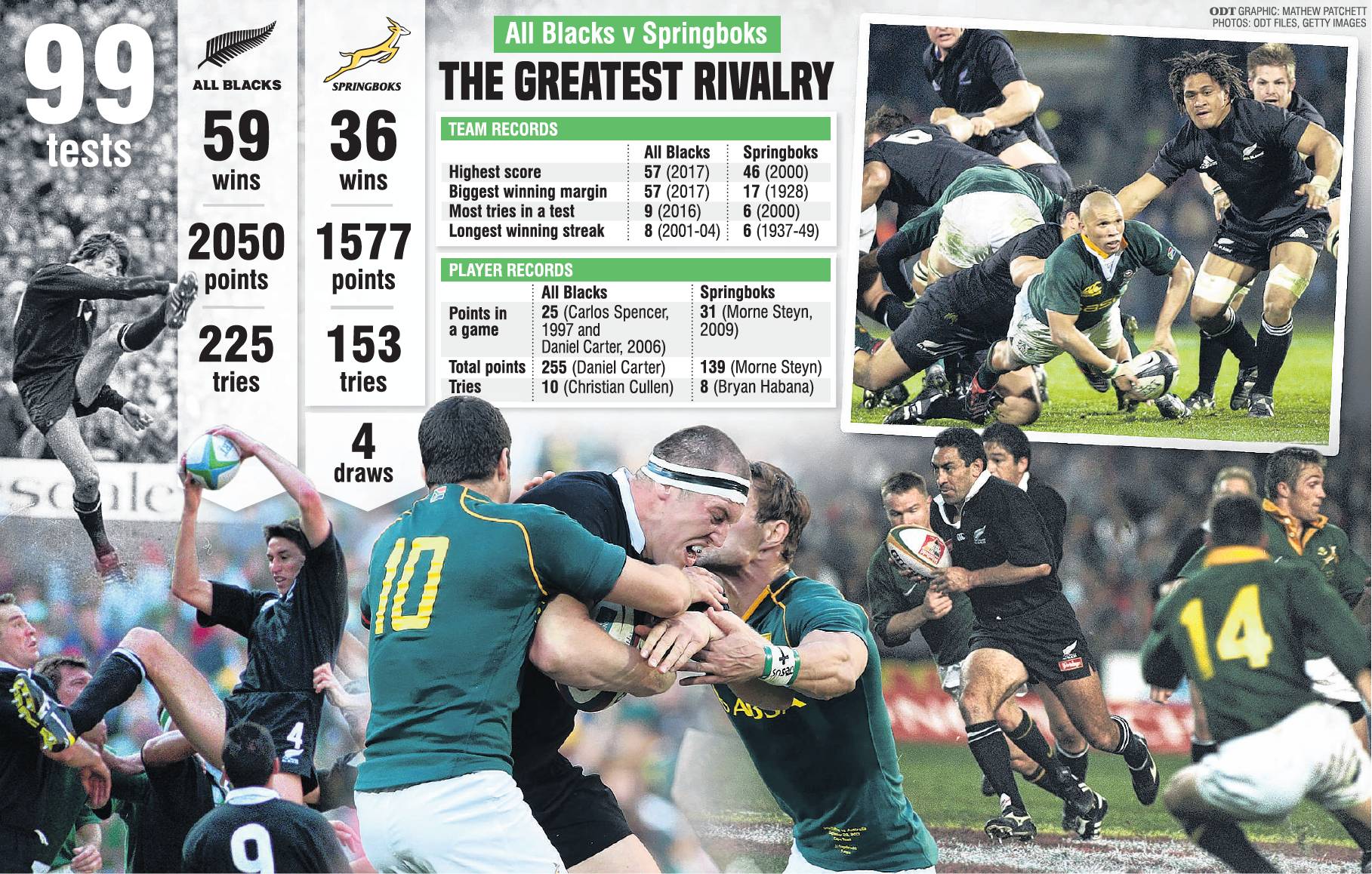 A century of titanic tussles — and nearly a century of games between the two greatest rivals in world rugby. Ahead of the 100th test between the All Blacks and the Springboks in (sigh) Townsville on Saturday, sports editor Hayden Meikle looks back on 10 great clashes between the nations.

It all started on a sunny late-winter day in Dunedin in front of 25,000 fans at a place called Carisbrook (RIP).

The seeds for the historic first test were planted two years previously when the New Zealand Army had toured South Africa — and, setting the tone for some lamentable times to come, agreed not to include Maori players.

This test is a trivia buff’s delight. Apart from being the first test between the nations, it featured: the home team wearing letters on the jerseys, instead of numbers; 40-year-old Ned Hughes in the All Blacks front row; Springboks called ‘‘Boy’’ and ‘‘Baby’’; Olympic hurdler Attie van Heerden on the South African wing; and the test debut of the great Mark Nicholls, as the All Blacks won 13-5.

There will never be another tour like this one.

New Zealand was gripped by rugby fever, and the Springboks played 23 games over three months, clashing with the likes of Poverty Bay-East Coast, the Hanan Shield XV and New Zealand Universities.

It all came to a head in the fourth test at Eden Park with the All Blacks leading the series 2-1. They sealed an 11-5 win with a memorable runaway try to loose forward Peter Jones, who later told national radio he was ‘‘absolutely buggered’’.

Remarkably, it was the Springboks’ first series loss in 60 years.

The test and the tour inspired what is arguably the greatest New Zealand sports book, the wonderful Old Heroes by Warwick Roger. 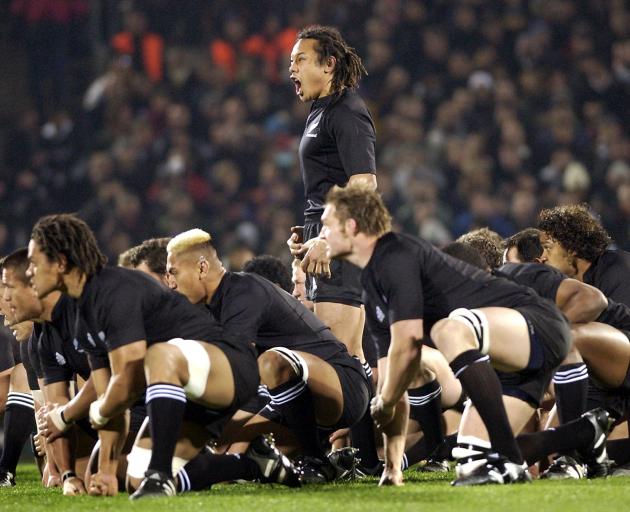 All Blacks captain Tana Umaga leads the All Blacks in the Kapa o Pango haka against the Springboks at Carisbrook in Dunedin in 2007. PHOTO: PETER MCINTOSH

The talking point of the series, for All Blacks fans at least, was the performance of the home country’s referees, who seemed to treat the tourists rather harshly.

In a forerunner to today’s concern over the Stone Age tactics of the Springboks, the home side was bagged by All Blacks coach JJ Stewart after the tour: ‘‘We outplayed South Africa. South Africa outkicked us. Goodbye rugby’’.

The All Blacks led this test after an Ian Kirkpatrick try, but the key moment was when Bruce Robertson chipped ahead and was taken out before he could score an almost certain try.

Actually, there will never be another tour like THIS one, and thank goodness for that.

New Zealand turned into a barbed wire battleground as the years of discontent about maintaining sporting relations with a country ruled by apartheid came to a head.

After mass protests, including a pitch invasion which caused the tour game against Waikato to be cancelled, it was 1-1 heading into the final test at Eden Park. The All Blacks won, 25-22, with fullback Allan Hewson kicking a late penalty.

But the game will forever be remembered for the sight of flour bombs being dropped on to the ground by protesters in a plane.

The All Blacks returned to the Republic for the first time since 1976 after the long-awaited downfall of apartheid.

The All Blacks were on a two-month tour, having lost the Bledisloe Cup series in Australia then swept aside some South African provincial opposition.

Unsurprisingly, the Springboks were a little rusty at Ellis Park after their isolation period, and the All Blacks dominated much of the game, No8 Zinzan Brooke scoring a neat try from a quick tap.

The Boks, containing 1981 tourists Naas Botha and Danie Gerber, rallied with two late tries to finish with a 27-24 loss.

Not a wonderful game of rugby, in terms of the product on the field, but the Springboks’ 15-12 win in the Rugby World Cup final at Ellis Park simply has to make this list due to the significance of the occasion.

The All Blacks, powered by Jonah Lomu in the most astonishing manner, had cut a swathe through the tournament but were hamstrung in the final by players who had suffered food poisoning (deliberate?), committed South African defence and a Joel Stransky drop goal in extra time.

Nelson Mandela wearing the Springbok jersey and presenting the trophy to Francois Pienaar remains the enduring image of this game.

Frank Bunce is often overlooked when people name their all-time All Black XVs, but few were better than the centre when he was in top form.

This was his greatest test, the All Blacks’ 35-32 win in Johannesburg inspired by two sensational long-range Bunce tries.

Few remember the score of this Carisbrook test (31-27 to the All Blacks), or that Leon MacDonald started at first five (eh?), or even that captain Tana Umaga made a brilliant defensive play in the last minute to stop Bryan Habana stealing the test.

This is the ‘‘Kapa o Pango test’’, the game before which the All Blacks shocked nearly everyone by unveiling a new haka created specifically for the team.

While the throat-slitting gesture at the end has been toned down, the haka has endured alongside the All Blacks’ regular Ka Mate pre-game challenge.

Perhaps not one of the obviously great tests — as so often, the Springboks relied on kick-and-chase tactics and suffocating defence, and the All Blacks were misfiring.

It is certainly notable for the display of goal-kicking from both teams. Dan Carter converted both All Blacks tries and landed five penalties, but the Springboks won 32-29 thanks to their dual threat kicking combination of Morne Steyn (two conversions, two penalties) and Francois Steyn, who landed two 60m penalties and dropped a goal.

The All Blacks and Springboks play constantly, it seems, in the professional era, but some games stick out more than others.

This was a boomer, a barn-stormer, and those who saw the All Blacks win 38-27 at Ellis Park were lucky to witness a bit of everything.

Liam Messam scored two fine tries, a peak-form Beauden Barrett glided in for a lovely individual try, Ben Smith added his own, the ageless Bryan Habana scored twice for the Boks before leaving the field with injury, and the crowd of 64,000 was generally entertained by some high-octane rugby.