Third title in a row for dominant OBHS 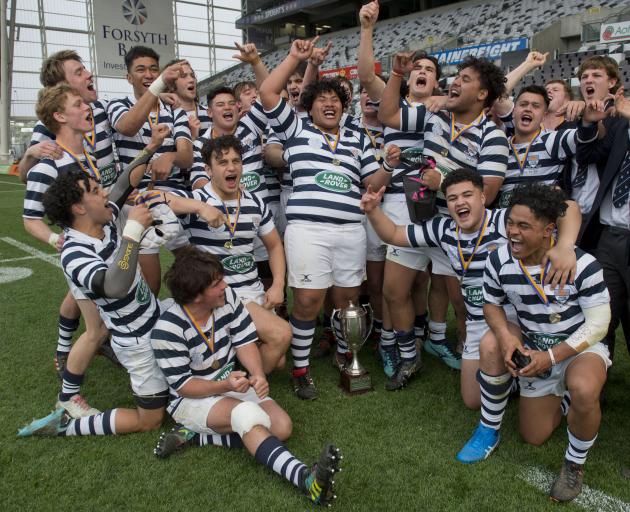 It was up 17-0 in as many minutes and then pulled away to be ahead 27-0 with just under five minutes left in the first half.

King’s bravely gave it a crack in the second half and halfway through the half was down 30-19 and the comeback was on.

But it did not score again as Otago Boys’ stood strong.

It was the third consecutive title for the school since coming back into the competition.

“We played exactly to the game plan in that first half, to be honest. You are playing on a hard and fast track, so you have to play the right way,” he said.

“Play territory and keep control of the ball. We did that and got the rewards.”

Turoa said the side did not want to go into a defensive mindset and sit on its lead in the second half but King’s came out to play and did well. But the team had stuck to its guns and held out King’s.

The side had improved throughout the season and he paid tribute to the its leadership group who led the side as the season worked to a climax.

“We have got some special players who do go unnoticed but they do a lot of work for our team.”

King’s would have been disappointed by its first half effort as it failed to hang on to the ball and made numerous errors.

Otago Boys’ first five-eighth Cameron Millar tallied 23 points in the match. He did not miss a shot at goal. He opened the scoring, picking up an intercept and running 30m to score under the bar.

Fullback Finn Hurley then scored for Otago Boys’, running a nice angle, while big blindside flanker Oliver Haig scored the third try for Otago Boys’ after making a run down the right and taking the return pass.

King’s improved in the second half and scored a couple of nice tries but it was far from polished.

Best for King’s was halfback Taine Hand, while flanker Jay Davis got round the field.