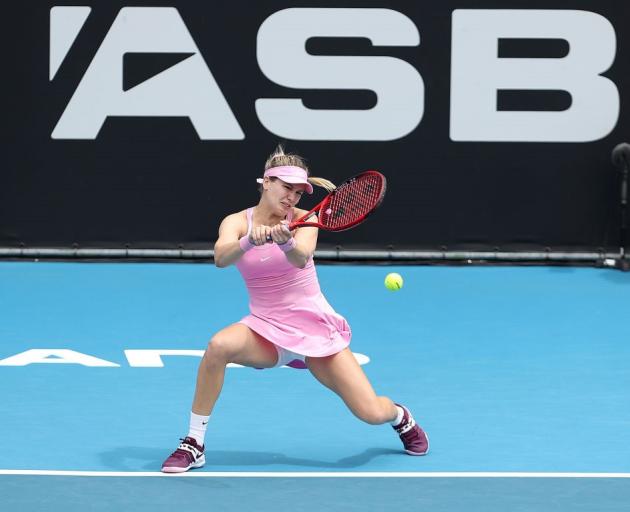 Eugenie Bouchard plays a shot during the ASB Classic earlier this year. Photo: Getty Images
The 2021 ASB Classic which was set to begin in early 2021, has been officially cancelled.

The announcement was made this afternoon, forcing tournament director Karl Budge to let go of New Zealand's premier tennis event thanks in large part to the Covid-19 pandemic.

It is the first time in the event's history it will not go ahead.

In a release, Budge says it is an unfortunate decision, but safety is their top priority.

"I'd like to thank the incredible dedication from the Classic team, volunteers and our sponsors who have strived tirelessly to make an event happen this summer," he says.

"We know we deliver the best annual event in New Zealand. Today's announcement won't change that. We look forward to the return of the Classic in Auckland next year. The planning starts now."

It is news that was foreshadowed a little under a fortnight ago by Budge himself, who confirmed the Government had gone quiet following three months of discussions with tournament organisers.

Budge said they were at an "SOS" stage and needed to hear back from the Government 'within a few days' in order to lock in players, which it appears never eventuated.

While no players were confirmed, the Herald understands there was a strong possibility 23-times Grand Slam winner Serena Williams was one of the headliners, who would have been defending her 2020 women's singles title.

Budge described the tournament as New Zealand's highest profile sporting spectacle, which has won the best international event five of the past seven years on the WTA Tour.

It is fair to say the ASB Classic has been the lowest of priorities from the Government's perspective when it comes to organising international sport within New Zealand's borders.

There has already been approval for a men's and women's cricket schedule this summer which will see Australia, the West Indies, Pakistan and Bangladesh all tour. The Silver Ferns also received the green light to host a three match international series with England.

The Government also eased isolation restrictions on the Wallabies who arrived in New Zealand on September 25 ahead of the two-test Bledisloe Cup series with the All Blacks, which kicks off this Sunday.