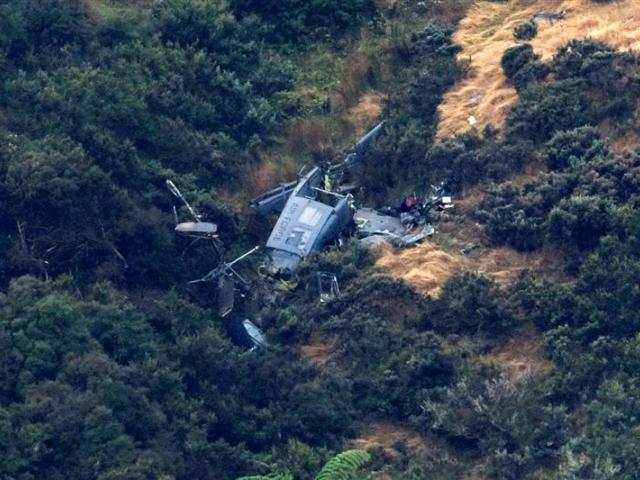 The three men killed when an Air Force Iroquois helicopter crashed on its way to Anzac Day activities crashed early today have been named.

Crash victims Flight Lieutentant Hayden (Muddy) Peter Madsen, Flight Officer Daniel Stephen (Dan) Gregory and left Corporal Benjamin Andrew (Ben) Carson. An inquiry has been launched into an Air Force helicopter crash north of Wellington yesterday as questions are raised as to why the machine was flown in fog over rough terrain rather than via the nearby coastline.

Tens of thousands of people have turned out at dawn services across the country to remember fallen New Zealand servicemen and women to mark Anzac Day.

The father of one of three air force crew killed in the Anzac Day helicopter crash says his son died doing what he loved and his family was "unbelievably proud" of him.

Thousands of people turned out yesterday, attending services and parades to honour those who served in New Zealand's armed forces.

A lone Royal New Zealand Air Force crewman ran for 2km through steep and rugged uphill terrain to get to the mangled helicopter wreck that contained the bodies of his three colleagues.

As soon as the karanga began, the crowd filling Anzac Cove for Gallipoli commemorations hushed completely.

Generosity made for a great Poppy Day in Dunedin yesterday.

Getting into the wrong truck on January 10, 1942, might just have saved Richard Skinner's life.

A new century marches on leaving behind those who witnessed the wars of the last.

People annoyed at missing a holiday because Anzac Day falls on a Sunday this year will be even more frustrated to find out that next year for the first time ever Anzac Day will fall on Easter Monday, meaning no holiday again.

Wind and rain may disrupt Sunday's Anzac dawn services in southern and central parts of the country, the MetService says.

A World War 1 trophy field gun in Naseby has been restored to pristine condition - except for shrapnel damage - in time for Anzac Day commemorations.

If you think it is tough choking back the emotion during the Last Post on Anzac Day, spare a thought this year for the bugler.

A roll of honour not yet officially unveiled has prompted an emotional reaction from the relatives of former pupils of Dunedin's Kavanagh College who died in World War 2.
A few hiccups disrupted the travel plans of a New Zealand contingent, including two Alexandra teenagers, which arrived in Gallipoli yesterday for Anzac Day commemorations. However, an Icelandic volcano was not to blame.
A ban on children walking in some Australian Anzac Day marches won't be adopted by New Zealand's Returned and Services' Association (RSA).

Laurel Dunn with the new war memorial at Portobello which will be officially unveiled on Anzac Day. Photo by Craig Baxter. A visit to Italy five years ago has resulted in Portobello this year having its first Anzac Day service in 50 years. Broad Bay woman Laurel Dunn said a visit to her uncle's grave at the Sangro River Cemetery in Italy five years ago made her think something had to be done at Portobello to remember the local men who died at war.