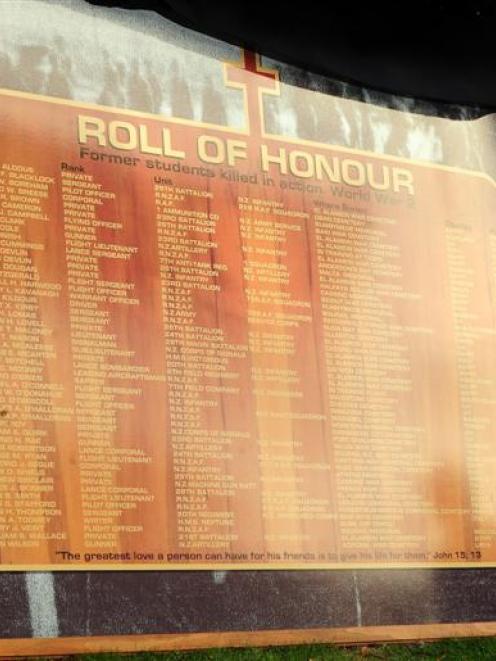 The roll records the name, rank, unit, age and place of burial of the 49 former pupils killed during the war.

It is the project of Dunedin writer Pauline Diack, a former relieving teacher at the school, who was originally only researching her uncle, Private John Kilgour, a former pupil of Christian Brothers College (now Kavanagh College), who died in Crete in 1941.

"I had his rank and serial number and knew where he was buried, but I'd never seen his name on any memorial."

As she started investigating, she found an Anzac Day banner listing of nearly 1000 names of Dunedin men killed at war.

Then began the painstaking process of matching the names to school rolls at the Hocken Library.

It took her a year to complete the list and she is hopeful it is a complete list of Kavanagh College's World War 2 war dead.

She said she was thrilled with the finished memorial, which was her biggest research project to date, and now "very personal" to her after all the work that went into it.

She had received at least one emotional call from a relative of one of the men on the roll.

The woman's father-in-law featured on the roll.

Her husband had never met his father, as he was killed in the war before his son was born.

"It was very emotional for them."

That couple would attend the official unveiling of the board at the college's Anzac assembly today.

Kavanagh principal Paul Ferris said the roll of honour was getting much attention from pupils at the school.

Nine of the surnames featured were the same as pupils attending the school today and it was "highly likely" there were family links in many cases.

The roll seemed to resonate with pupils, he said.

One pupil who noticed one of the surnames was the same as his told his family at home and the next day, his grandfather brought into the school pictures and a copy of a letter commending the brave actions of the private, who was killed in a plane crash on the English Channel.

The private was the pupil's great-uncle.