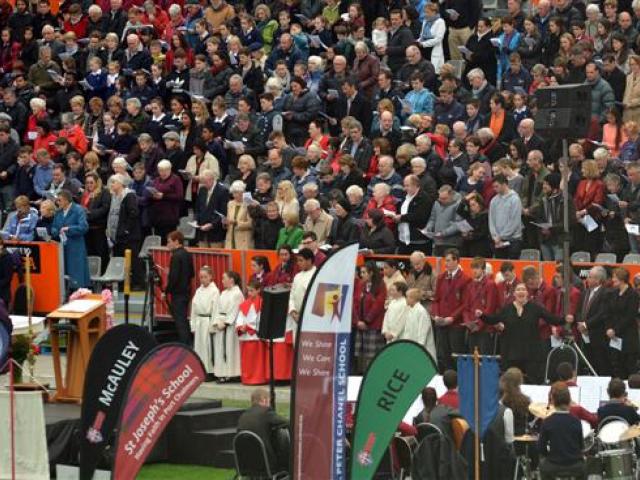 For the second time in little over a week, Forsyth Barr Stadium in Dunedin has been transformed into a House of God.
I try to claw my way back into dreaming, but it's useless.
You know, it's really no surprise Eve took a bite of that apple in the Garden of Eden.
It was Ronald's big day: he was turning 5.

If he had only paced himself, Liam Eathorne might have got to celebrate a remarkable twenty20 double hundred.

On any given day, Kavanagh College's top pupils would probably give you the shirts off their backs, if you were in need - except when they are wearing their ''Good One'' T-shirts, and then they might not.
Kavanagh College is seeking to give its team a shot in the arm as it attempts to get back into the Highlanders First XV competition.

Kavanagh College pupil Matt Martin (17) awoke from a coma without any memory of the Dunedin rugby game in which he was concussed - or of the November death of his mother.
Kavanagh College has won the Bishop's Shield, in the 70th annual Otago and Southland Catholic secondary schools' public speaking competition.
''For the kingdom, the power and the glory are yours, now and forever. Amen.''
Language is a necessity. It is our passport to each other and our world.
Let's not be immature, ladies,'' Rhonda tuts playfully, raising her voice above the infectious giggles.

Some of Dunedin's brightest young musical talent is getting the chance to experience working in a recording studio as part of a youth mentoring project.

Young Kavanagh College basketballer Richard Rodger is about to mix it with some Australian tall timber.

A former Kavanagh College pupil was among the country's top 40 pupils who received awards at the 2011 New Zealand Qualifications Authority Top Scholarship Awards ceremony at Government House in Wellington yesterday.
Kavanagh College held its junior prizegiving this week. The prize list is: