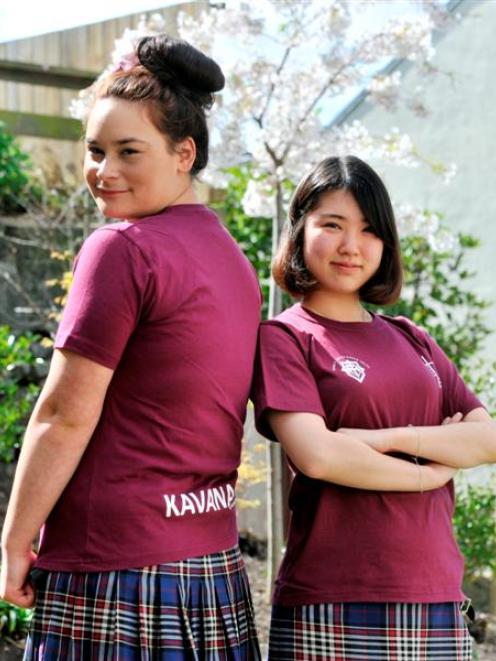 Sia Caldwell (left) and Sherry Sim model the 2013 ''Good One'' T-shirts they designed. Photo by Linda Robertson.
On any given day, Kavanagh College's top pupils would probably give you the shirts off their backs, if you were in need - except when they are wearing their ''Good One'' T-shirts, and then they might not.

For the lucky few who have been awarded the special T-shirts, they are prized possessions because they are rare, and those wearing them are recognised as being all-round good sorts.

Principal Tracy O'Brien said they were part of the college's ''Good One'' system, where cards were given to pupils who achieved academic excellence, or displayed any of the school's core values - respect, service, justice and truth.

''It's a very desired item. It recognises success.

''The kids are really proud to wear it. It has a really positive community effect in the school.''

It is one of the more novel approaches to building good behaviour in schools, he said.

Because this year's winning design is so popular, pupils are jumping over each other to do good deeds so they can be awarded one.

The designers, Sia Caldwell (17) and Sherry Sim (18), said more than 100 were awarded last year, and they believed more would be awarded this year, because of the popularity of the design.

Sia said the maroon-coloured material with a cross and the school's name and logo in white was simple, but its simplicity was a major part of the T-shirt's popularity.

''It's an all-round design that can be worn in lots of different places, including school sporting and cultural events.''

Sherry said the best part about creating the winning design was they automatically received one of the T-shirts for their efforts.