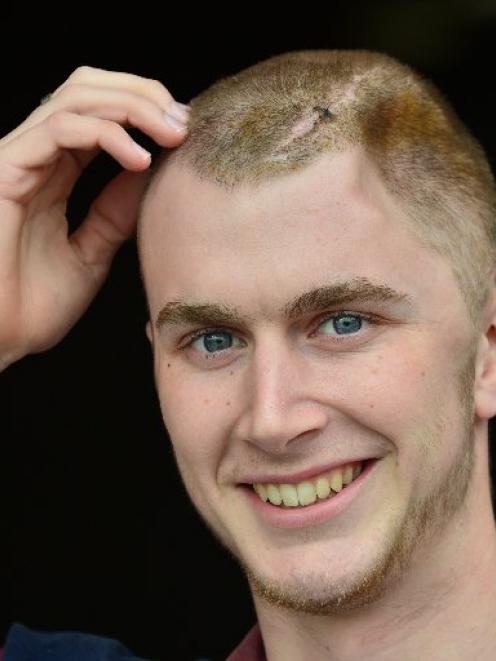 But Matt's memory is returning and he was yesterday allowed out of hospital to celebrate his 17th birthday with his family.

Matt had lunch in Dunedin and dinner with his father and three older brothers at the family home in Mornington.

He was moved from Dunedin Hospital to Isis for rehabilitation a week ago to work with a physio and speech therapist, and on restoring gaps in his memory.

''Most of it is coming back. I'll never get that game back though.''

All he remembers about the under-18 grade match earlier this month in which he suffered a head injury was borrowing his older brother's boots to play.

Matt said as more people visited him in hospital, more of his memory returned, but he had not remembered the death of his mother, Sharon O'Callaghan, from cancer in November.

''I kept asking Dad how Mum was and asking why she hadn't been in.''

Mr Martin avoided his son's questions so as not to put unnecessary stress or anxiety on his son. Then Matt saw a memorial tattoo for his mother on his father's forearm, Mr Martin said.

Matt was later able to recall his mother's death.

Mr Martin had stayed at the bedside when Matt was in a coma.

''It was a pretty hard time. At that stage, we didn't know what was happening; whether he was going to survive or not.

'The first moment of relief came when Matt squeezed his father's hand.

''It was pretty amazing. The first day he woke up, he had next to no movement on his right side and was like that for a few days, but it slowly came back.''

The right side of Matt's body was now ''good as gold'' but there was some numbness in his left leg that could take up to two years to return to normal, Mr Martin said.

Matt said that he would have an operation in a month to have a titanium plate inserted in his head to replace a piece of skull that had been removed to relieve pressure on the brain.

Mr Martin was at the rugby game and he said the tackle on his son was fair: ''It wasn't the kid's fault; it was just one of those things.''

Although Matt will not play rugby next year, he hopes to play again in 2015.

He intended to help coach the school's First XV next year.

Mr Martin said he would not stop Matt returning to rugby but would prefer his son play a non-contact sport because he had been concussed three times previously.

''A future in rowing might be better,'' Mr Martin laughed.

Mr Martin was hopeful his son would return home in a few weeks.

''We expect he's going to get a full recovery. We just don't know how long it's going to be. But he's way ahead of what people expected.''

Yesterday, Matt was happy leading a normal life and getting birthday presents.

''I got an iPad from everyone at school - that was pretty cool - and my dad got me a watch.''

Mr Martin said staff at Dunedin and Wakari Hospitals and support from the school, rugby team, Otago and New Zealand Rugby Unions had been outstanding.