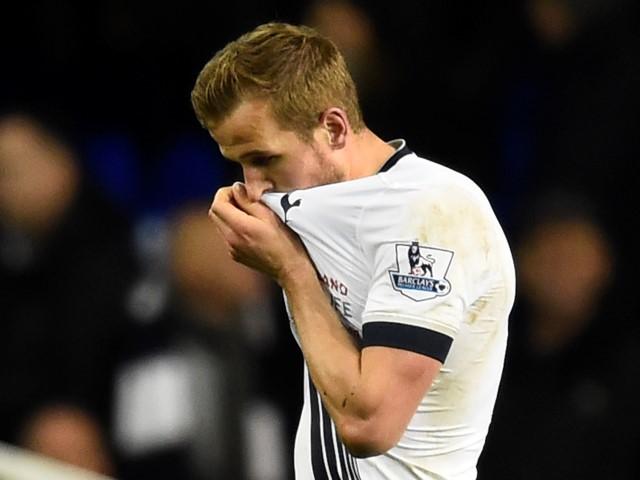 Tottenham's Hotspur's Premier League title hopes are hanging by a thread after a 1-1 draw at home to West Bromwich Albion left Leicester City tantalisingly close to being crowned champions of England for the first time.

Liverpool have maintained their stranglehold over Everton in the Merseyside derby with a one-sided 4-0 stroll against their local rivals, who had Ramiro Funes Mori sent off for a horror-tackle in the second half.

Manchester City's hopes of regaining the Premier League title suffered a potentially grievous blow as they were held to a goalless draw by struggling Norwich City at Carrow Road.

Leicester City stumbled in their pursuit of the Premier League title when they were held to a 2-2 draw at home by West Bromwich Albion, who secured a share of the points with a stunning free kick from Craig Gardener.

Swansea City climbed out of the relegation zone after a first-half header by captain Ashley Williams gave them a 1-0 win over Watford just hours after they named Francesco Guidolin as their new head coach.

Leicester City won 1-0 at Tottenham Hotspur to rekindle their unlikely Premier League title challenge and draw level at the top with Arsenal, who conceded a late goal to draw 3-3 at Liverpool.

Chelsea began the new year offering signs of a revival as the Premier League champions won 3-0 at Crystal Palace with goals from Oscar, Willian and Diego Costa, while Tottenham Hotspur drew 1-1 at Everton.

Manchester United's winless run continued but they gave under-fire coach Louis van Gaal crumbs of cheer with a committed display in an entertaining 0-0 draw with Chelsea while Arsenal went top of the table.

Nigerian international Odion Ighalo scored twice as a buoyant Watford won 3-0 at home to Liverpool to consolidate seventh position in the Premier League, only one point behind the top four.

Manchester City clambered back to the top of the Premier League amid late drama, a Yaya Toure shot deflecting off team mate Kelechi Iheanacho for a lucky stoppage-time winner in a 2-1 victory over Swansea City.

The Juergen Klopp effect began to really take hold as Liverpool hammered mercurial Manchester City 4-1 at the Etihad Stadium to provide the Merseysiders' new coach with his most striking Premier League win yet.

Jamie Vardy equalled the Premier League record by scoring for a 10th successive match as his Leicester City side went top after winning 3-0 at Newcastle United, while champions Chelsea ended their slump with a 1-0 win over Norwich City.

Manchester United's goal drought has continued with a scoreless draw at Crystal Palace but manager Louis van Gaal brushed off criticism that his squad lacks firepower.

Promoted Bournemouth announced their arrival in the top flight with a bang after Callum Wilson's hat-trick sealed their first Premier League victory in a 4-3 success at West Ham United.

Promoted Bournemouth are still waiting for their first Premier League points after succumbing to a controversial Christian Benteke goal in a 1-0 defeat at Liverpool.

The Premier League season is only a week old but the problems are already piling up for misfiring champions Chelsea after a 3-0 thrashing at Manchester City.