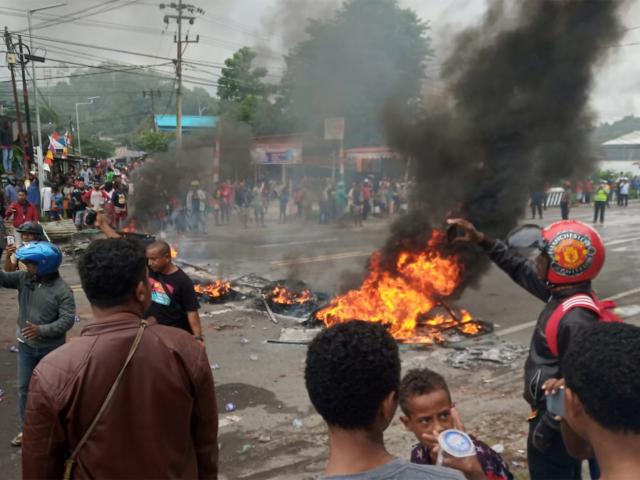 Indonesia's easternmost provinces of Papua and West Papua on the island of New Guinea - collectively known as Papua - have been racked by civil unrest for almost two weeks.

A volcano erupted on the Indonesian holiday island of Bali, causing some overnight flight cancellations to and from Australia as an ash cloud rose into the sky.

Fishermen Budi and Gauk left home an hour before dawn on Monday and, with prawn nets stowed on their shallow teak boat, they headed out in a becalmed sea off the coast northeast of Jakarta in clear...

The sense of relief was "palpable" among the 120 survivors huddled on the deck of the NZ Defence Force Hercules aircraft as it took off from the tsunami devastated Indonesian city of Palu.

At least 10 people were killed by strong tremors that rocked Indonesia's holiday island of Lombok, authorities said following the latest in a series of earthquakes that killed hundreds and forced thousands to flee their homes recently.

A fresh tremor of 6.3 magnitude struck the Indonesian holiday island of Lombok, the U.S. Geological Survey said on Sunday, after an earthquake killed more than 430 people there earlier this month.

Rescue workers have found chaos and destruction across the Indonesian resort island of Lombok after a magnitude 6.9 earthquake killed at least 91 people and prompted an exodus of rattled tourists.

A strong quake has struck the Indonesian island of Lombok, a popular tourist destination

A volcano on the Indonesian holiday island of Bali erupted on Monday, hurling lava and ash kilometres into the air and prompting panicked residents to flee their homes.

A shallow earthquake brought down hundreds of poorly built buildings in Indonesia, forcing more than 2000 people to flee their homes,

A magnitude 6.4 earthquake struck off the coast of Indonesia's Tanimbar Islands today, the US Geological Survey said.

A critically endangered Sumatran tiger was brutally killed in Indonesia , the latest victim of a killing spree targeting near-extinct species that has alarmed conservationists.

Indonesian police have arrested an Australian, an American and a Malaysian on the holiday island of Bali for drugs offences, the latest foreigners to run afoul of some of the world's strictest laws against narcotics.

A tropical cyclone killed 19 people on the Indonesian island of Java, officials said, with most of the victims caught under a landslide.

Indonesia's transportation ministry said it will extend the closure of Bali's I Gusti Ngurah Rai International Airport for a further 24 hours because of ash from the eruption of the island's Mount Agung volcano.

Jetstar has cancelled all flights in and out of Bali due to the ash cloud around the Mount Agung volcano.

Indonesian soccer fans are mourning the death of Choirul Huda, the long-term goalkeeper and captain of top flight side Lamongan FC, usually known as Persela, following a collision with a teammate during a weekend match.

At the beginning of the battle that has raged for the past 12 days in Marawi City at the southern end of the Philippines, dozens of Islamist militants stormed its prison, overwhelming the guards.

With their heads covered with Islamic headscarves, the three members of the Indonesian band VoB ("Voice of Baceprot" or "Noisy Voice") do not look like your typical heavy metal group.