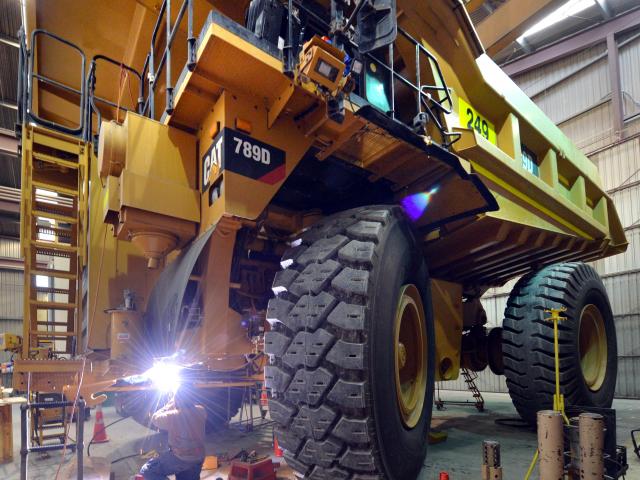 Oceana Gold's new Coronation open pit development at its Macraes site in East Otago is progressing towards production, but the estimated 100,000 ounces of gold it contains will not extend the overall Macraes mine life.

A massive slip at the open pit of the Macraes Gold Mine in Otago cut off access to underground workers, mining company Oceana Gold says.

There appears to be a degree of optimism among 70 Oceana Gold employees, despite learning yesterday they are to lose their jobs at the Macraes gold mine.

The speed at which Oceana Gold has pushed through job cuts at Macraes gold mine has shocked workers and the fall-out is expected to continue with losses at other firms.

Hopes are high the review of Oceana Gold's operations - particularly of its Macraes gold project - will not cut deeply into the Otago economy.
A 40-year-old man was flown to Dunedin Hospital with serious injuries yesterday after the utility vehicle he was driving crashed off the road at noon.

A 109-year-old engine from the historic gold stamp battery at Macraes mine will undergo extensive repairs for the first time.
Just how is the community going to benefit from Oceana Gold's mine expansion when it is going to be left with "three pits filled with contaminated water"? asked panel member Cr Duncan Butcher yesterday.
A 53-year-old man was flown to Dunedin Hospital with serious injuries yesterday after the tractor he was driving rolled off Macraes Rd, near Shag Valley Back Rd, about 1pm.

A simple but poignant tribute was paid to the 29 men who died at the Pike River Coal mine at Oceana Gold's Macraes gold-mining operation open day at the weekend.
Listed gold miner Oceana Gold has identified new gold resources at its Macraes gold mine which could add another one and a-half years to the life of the mine.

Oceana Gold (New Zealand) Ltd will take delivery later this year of a massive 360-tonne mining excavator worth about $8 million.

Peter and Cheryl Simpson might make the trip from Oamaru to Macraes every day but they never tire of the journey.

Mining in New Zealand is a male-dominated industry, so what is it like for women at Oceana Gold's mine at Macraes? Sally Rae talked to a nail-polish wearing grandmother who drives a 120-tonne truck.

"Technology, eh." Metallurgist Geua Kivung beams as she describes how the oxidation process can be done in 60 minutes in the process plant at OceanaGold's Macraes site, rather than the traditional method which takes millions of years.
OceanaGold Corp said results from drilling at its Frasers Underground mine in the Macraes Goldfield in Otago identified extensions to the area of gold mineralisation.

Investment and jobs are key factors in any decision to allow mining of New Zealand's protected land areas. OceanaGold has been digging in our backyard at the Macraes site in East Otago for 20 years. Sally Rae and Craig Baxter went underground to meet the workers.
Like the Stanley Burgers served at nearby Stanley's Hotel, everything about Macraes gold mine is big.