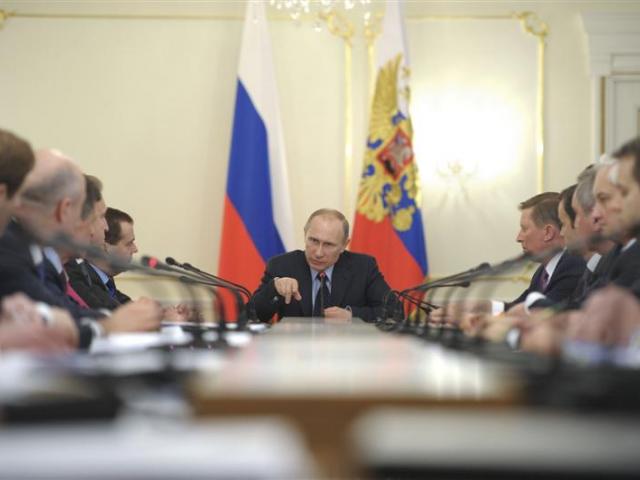 President Vladimir Putin is to pardon one of his best known opponents, oil tycoon Mikhail Khodorkovsky, after a decade in jail in what may be a gesture to critics of his human rights record before Russia hosts the Winter Olympics.

Russian police rounded up 300 people at a Muslim prayer room in Moscow on Friday after President Vladimir Putin ordered a crackdown on radical Islamists ahead of next year's Winter Olympics in Sochi.

Russian President Vladimir Putin and his wife, Lyudmila, have said on state television that they have separated and their marriage is over after 30 years.

President Vladimir Putin has signed a law that bans Americans from adopting Russian children and imposes other sanctions in retaliation for a new US human rights law that he says is poisoning relations.

President Vladimir Putin has overseen Russian military exercises and warned soldiers that more conflicts around the world meant they had to "keep their powder dry" and improve Russia's defences.

Russian President Vladimir Putin has admitted that some of his most famous media adventures with wildlife have been carefully staged but has said they were worthwhile because they drew the public's attention to important conservation projects.

Members of an all-woman Russian punk band on trial for staging a protest at the altar of Moscow's main cathedral will likely receive long jail terms despite President Vladimir Putin saying they should not be judged too harshly, a defence lawyer said.

Russian protest leader Alexei Navalny said he was sure he would go to prison after being charged with theft, and warned this was just the start of a crackdown on dissent by President Vladimir Putin.

Russian President Vladimir Putin has made his third visit in less than a month to an area hit by devastating floods, and promised the government would rebuild homes as the Kremlin sought to minimise the political damage from the disaster.

President Vladimir Putin has ordered an investigation into accusations that officials could have done more to prevent floods killing at least 150 people in southern Russia, hoping to limit the criticism that has followed earlier disasters.

President Vladimir Putin promised to project Russia's might on the world stage in a rallying speech to troops and war veterans celebrating victory over Nazi Germany at a military parade bristling with weapons on Red Square.

Vladimir Putin took the oath as Russia's president with a ringing appeal for unity at the start of a six-year term in which he faces growing dissent, economic problems and bitter political rivalries.

Thousands of protesters chanting "Russia without Putin" took to the streets of Moscow to challenge Vladimir Putin's victory in a presidential election which international monitors said was unfair.

Vladimir Putin has claimed victory in Russia's presidential election and, tears rolling down his cheeks, said it was a historical turning point that had prevented the country falling into the hands of enemies trying to usurp power.

Vladimir Putin is going to win the presidential election in Russia on March 4.

Security forces have foiled a Chechen-linked plot to assassinate Prime Minister Vladimir Putin, state television reported in a broadcast likely to boost support for Putin's bid to regain the presidency.

Vladimir Putin says the world faces a growing "cult of violence" and Moscow must not let events like those in Libya and Syria be repeated in Russia, warning the West against interference in a country he intends to lead for years to come.

Police have clashed with demonstrators protesting vote fraud in Moscow and at least two other major Russian cities, as anger has boiled over against Prime Minister Vladimir Putin and his ruling United Russia party.