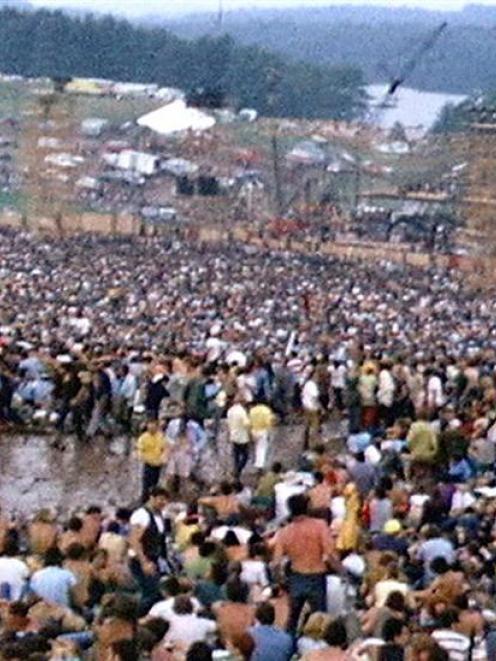 The crowd at Woodstock fills a natural amphitheatre with the stage at the bottom. Photo by Derek Redmond.
August 18, NEW YORK: More than 300,000 people were wandering in a sea of mud, sickness and drugs yesterday at a hippie-style music and art festival as officials awaited permission to declare the festival site at White Lake, New York, a disaster area.

Thousands more, most all of them young, are still on their way, ignoring pleas by local and State authorities to go home. They are walking and riding on past stalled cars on traffic-clogged highways. Complaints are pouring in from residents round the 600-acre dairy farm which is the site of the festival in the Caddishly Mountain area north of New York City.

Police reported up to 75 arrests, mostly on drug charges, but no large disorders. One youth was killed when a tractor rolled over him as he slept in a sleeping bag in a muddy paddock. Another, apparently on drugs, fell from a sound tower on the stage and broke his back. A four-hour early morning downpour turned the already littered fields into a floating garbage heap.

Food was getting scarce.

Dr William Abruzzi, head of medical services for the three-day festival, said he had treated more than 1000 people at a makeshift 20-bed hospital since the festival began on Friday.

Many were suffering from adverse hallucinogenic drug reaction. He asked for volunteer doctors to come to White Lake.

John Morris, in charge of operations at the festival, said a batch of LSD was being passed round. Marijuana was also being used. Others were suffering from intestinal troubles. Three emergency tracheotomies were performed in the hospital.

Festival sponsors urged people over a loudspeaker to keep calm, and warned youngsters against accepting bad drugs. Several people became seriously ill after taking bad LSD, and the sponsors announced that someone was selling "bad acid".

Dr Abruzzi said about 500 medical volunteers were working. The situation was under control, he said, but "if they keep coming I can't possibly render adequate medical care. We have reached as close the critical point as possible."