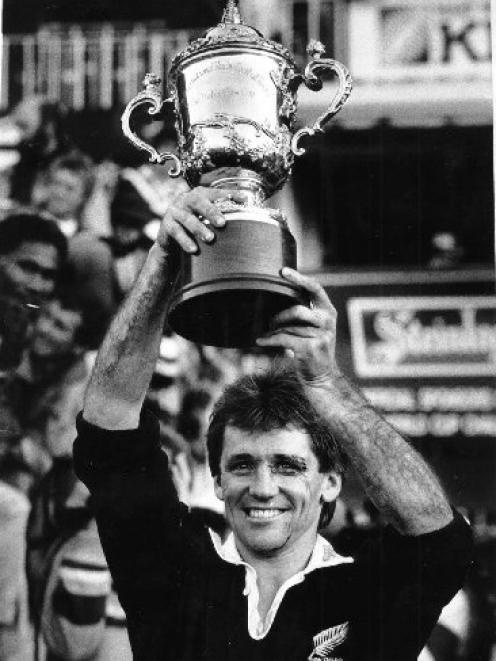 All Black captain David Kirk with the Webb Ellis Trophy. Photo: The New Zealand Herald
June 22: If the inaugural World Cup rugby competition has done nothing else, it has restored the prestige of the game in New Zealand and returned the faith and interest of thousands of New Zealanders when so many of them had despaired about what was happening.

But the World Cup has done more than that: it has helped rugby, in both a positive and negative sense, in many parts of the world.

And it has been a credit to the huge audiences who have followed the matches throughout the tournament that they have so frequently supported the underdogs in good spirit.

New Zealand can take particular pride and pleasure from the resurgence in our own game and in our own team: the rebuilding process has brought the All Blacks to a fine peak and a memorable victory.

New Zealand enters the records as the inaugural winner, and as a victor which justified the applause by the quality and dedication of its play.

We should remember, too, that the World Cup has been played in our own region, in New Zealand and Australia, and though television coverage has been available elsewhere, the enthusiasm for the game has not been as great nor has there been the opportunities of our own crowds to be so.

Yet the success of the venture, overwhelming really in view of what some doomcasters were predicting, will be good for rugby everywhere.

The visiting teams, even those who suffered heavy defeat at the hands of such senior sides as New Zealand and Australia, will have left for their homelands determined to achieve higher levels of skills, to emulate some of the very fine forwards the All Blacks, for instance, have unveiled ... to develop the fleet-footed skills of some of the French backs ... the goal-kicking ... training methods and so on.

It would be unrealistic to suggest the inaugural competition has been without blemish.

There have been problems, but there is now a formula available for launching slightly different formats in future, possibly some form of elimination tournament, so that the second and third level sides have an opportunity to sort out their position beforehand, and thus avoid hidings by 50 points.

On the other hand, some of these third-level sides might argue that the opportunity to compete, even when losing by wide margins, gives them greater opportunities to improve.

Like the "Golden Oldies" tournament, the Rugby World Cup looks to have established a permanent niche in the game internationally.

It is encouraging that all of the teams competing have been shown to have players of real international quality.

They can return to their homes with the knowledge that this player or that is up with the best available, and their project could be to seek to develop others to similar levels of skill.

There have been teams of great spirit, like Wales, which have gone beyond the levels predicted for them ... teams of considerable character, like France, which have won new enthusiasm here for their often immaculate running skills ...

The All Blacks have won, but so has rugby.