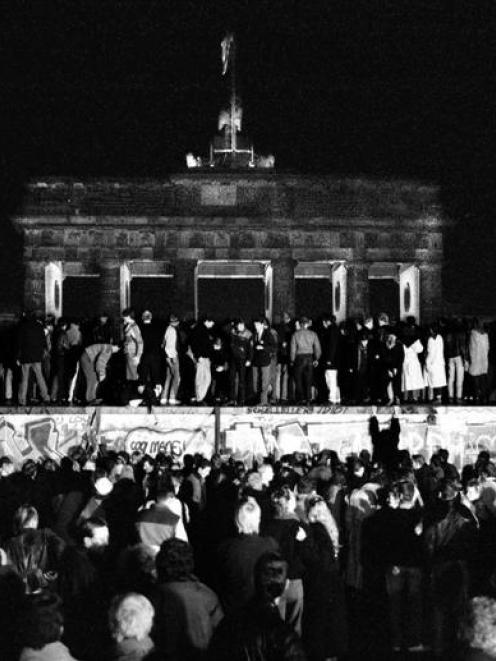 East and West German citizens celebrate as they climb the Berlin wall at the Brandenburg gate after the opening of the East German border was announced. Photo by Reuters.
Thousands of Germans from East and West embraced in laughter and tears after the East dramatically threw open the 28-year-old Berlin Wall.

In a wildly festive night, strangers hugged each other like long-lost relatives.

The atmosphere of freedom was electric.

At the funnel-like Invaliden Strasse crossing point, where massive wedges of concrete narrow the road through the wall to a single lane between plate-glassed watchtowers, thousands of Germans converged from both sides for an ecstatic street party.

Pleading with the crowd over a loud-hailer, the mayor of West Berlin, Mr Walter Momper, begged his citizens to let East Berliners have the first taste of joy.

"Dear people! The border is open," Mr Momper shouted over the cheering.

"But please, will the West Germans stand back and let the East Germans through first," he said.

West German border guards, with arms linked but grinning broadly, strained to hold back West Berliners pressing for a midnight stroll through the city they once dismissed with a hopeless shrug as "over there."

East German border guards, once authorised to shoot to kill would-be wall jumpers, invited reporters and cameramen up on to their raised bunkers for a better view.

Headlights blazed from hundreds of East German cars, jammed solid along the street leading up to the wall. They waited for the crowd to walk through so they could drive across.

An East Berlin man called Joereg (38) said he had been to the Soviet Union a score of times in his life, but never to the West.

"It's like with a child. You can tell it a thousand times that fire is hot. But it will still want to touch it just once to see. And we've always been told that capitalist fire is especially hot," he said.

Joerg waved an up-to-date West German map of the former German capital "so I won't get lost in the capitalist jungle."

Across the eastern half of the city, incredulous taxi drivers hurtling around in truck-like East-bloc cars flashed the news of each new wonder across their radios.

"He says the taxis from the East are simply driving across into the West at Heinrich Heine Strasse," a driver said.

Even the strictly-enforced no-smoking law was ignored.

"Tonight, everything is allowed. And if anyone doesn't like it, I'll just get my wife and kids and move out."

WEST BERLIN, November 12:
The mayors of West and East Berlin met in Postdamere Square yesterday to open a new crossing point through the wall, the first time the civic leaders of the divided city had met on the East-West front line.

According to local radio East Berlin's Erhard Krack thanked the border troops and engineers for clearing the 15-metre gap through the wall.

West Berliners scrambled on to the wall on either side of the new gap and scaled nearby trees, cheering and whistling as the new crossing point was inaugurated.

Some of them shouted: "We want in - we want to have breakfast in Alexander Square (East Berlin's main square)."In the crowd of about 5000 people, men lifted their wives and children on to their shoulders to see the most symbolic action yet in the breaking down of 40 years of political barriers between the two halves of the city.

At least 800,000 East Germans streamed across the wall into West Berlin on Saturday.