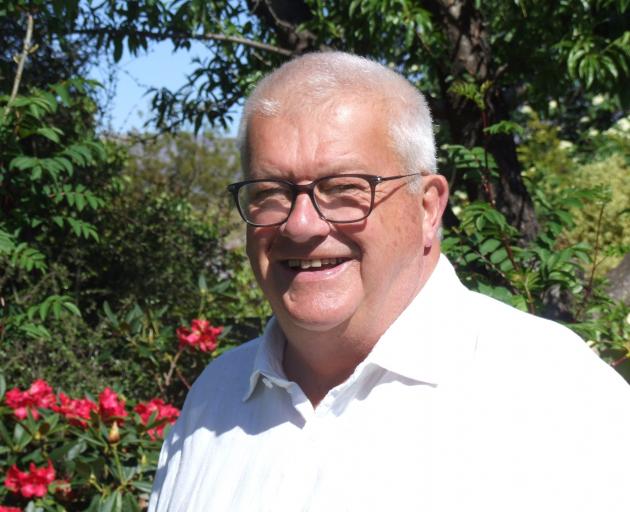 Stuart Heal has stepped down from the board of Pioneer Energy. PHOTO: SALLY RAE
Pioneer Energy recently farewelled its long-serving board member of 13 years - and chairman for the past seven - Stuart Heal, who has stepped down. He talks to business editor Sally Rae about his tenure with one of the region’s success stories.

Stuart Heal acknowledges he will miss his involvement with Pioneer Energy - one of Otago’s quiet achievers - but the Cromwell-based businessman is also keenly aware of the importance of succession planning.

That was something he learnt during his tenure as chief executive of South Island-based rural supplies business CRT (which later merged with the North Island’s Farmlands to become a national co-operative).

Mr Heal, also a former New Zealand Cricket chairman, believed people often tended to stay in exciting roles for too long, and he was happy to hand the Pioneer role over to Rob Hewett who had been chairman-elect for nearly a year.

In many respects, Pioneer was similar to CRT in that the focus was on making money to distribute to shareholders. At CRT, those shareholders were the farmers; at Pioneer, it was the community.

Pioneer was formed in 1999 after the electricity industry reforms and evolved from the generation assets of the former Otago Central Electric Power Board, and it now owned and operated a diverse portfolio of energy assets, products and investments throughout the country.

It is wholly-owned by the Central Lakes Trust and pays an annual dividend to the trust. The money is given by the trust to community projects and services and, since its inception in 2000, it has distributed more than $115million.

Mr Heal joined the board in 2007, having finished at CRT in 2004 after 20 years as chief executive and his entire working career with the company, starting in Gore.

He and his wife Adrienne had bought a property in Cromwell as a holiday house and they ended up moving to Central Otago permanently with the intention of him moving from management to governance.

Wanaka businessman Ian Farrant was particularly helpful, as a mentor, and a "pretty good example to follow".

After moving to Cromwell, Mr Heal took a year to catch his breath after what had been a fairly exhausting time at CRT.

Pioneer’s advertisement for directors appealed to him; while he knew nothing about the energy sector, it was locally owned and the money went back into the community. Basic business rules applied anywhere and he figured he could learn about the sector.

When he joined, Pioneer Energy was "pretty tiny" and "if it rained, we made money, if it didn’t, we didn’t", he said succinctly.

Several years later, Sir Eion Edgar - who has had a long involvement with the Central Lakes Trust - commented that the company had a "lazy balance sheet".

In 2012, Pioneer opened its first wind project - the Mt Stuart wind farm - on Mr Hewett’s farm on the southwestern side of the Manuka Gorge, and that was the beginning of its diversification.

The following year, Mr Heal took over as chairman from Allan Kane, who had been "fantastic" to work under, while chief executive Fraser Jonker had just been appointed.

The company started to diversify and grow "pretty aggressively" with the full support of its shareholders and, in 2016, it underwent rebranding.

Other projects continued and partnerships developed to enable growth to happen.

In 2016, there was the acquisition of the Aniwhenua hydro-power station in the Bay of Plenty, which was its biggest investment and also a huge move.

Until then, the company was only really in Otago-Southland and only in run of river. When it started on its growth path, it knew it had to have bigger geographical coverage and wider spread in the energy sector, he said.

Last year, it unveiled a long-awaited multimillion-dollar hydro-power scheme near Alexandra. The system, sourced from the Fraser River, could generate enough electricity to power 4000 households.

The Matiri hydro scheme at Murchison was due to be opened, continuing the geographic spread, while work was under way on a joint venture at Reporoa - building New Zealand’s first large-scale food waste-to-bioenergy facility.

The anaerobic digestion facility is owned by Ecogas - a joint venture between Pioneer Energy and Ecostock Supplies Ltd - on land owned by T&G Fresh, a New Zealand fresh produce business.

The project aimed to be ready and operational in 2022. When up and running, it would turn 75,000 tonnes of organic waste, from businesses and kerbside food scrap collections throughout the North Island, into sustainable, renewable clean energy.

The facility will use anaerobic digestion - a technology already used successfully overseas - to generate enough energy to annually power up the equivalent of about 2500 households in the region, produce clean biofertiliser for about 2000ha of local farmland, and provide CO2 and heat to enhance the growth of tomatoes in T&G Fresh’s local glasshouse.

As Mr Heal later pointed out to Sir Eion, the balance sheet was "not lazy now".

The company could have stayed small but, fortunately, it had the support of its owners to keep growing. Quite rightly, there was the expectation of a dividend, he said.

The community was extremely fortunate to have both Pioneer Energy and the Central Lakes Trust, something that residents did not necessarily realise.

Business in general was hard, and energy was a tough sector. But Mr Heal was also a great believer that if a company had an agreed strategic plan and direction, then it had a much greater chance of succeeding.

Pioneer had been strong strategically; there was no confusion about diversification, both geographically and within the sector.

In addition to supportive owners, there was both an excellent board and excellent management, and when all three factors were "in sync" - "you’re halfway to succeeding, in my experience", Mr Heal said.

Mr Jonker was an "amazing" chief executive and he had had a good relationship with him, talking regularly and there were "no surprises". Mr Heal said he was not an interfering chairman.

When it came to the move from management to governance, it was useful for him coming from a farmer-dominated board at CRT. Having been chief executive for two decades, he had a fair idea of what questions to ask without getting involved in management.

While Pioneer Energy was under the radar screens of the "big guys", it was big enough to get some economies of scale. A highlight was the $10million dividend paid last year, the first time the company had hit that figure.

While it was the trust - not the company - that dispersed that money, it made a difference to organisations.

Another highlight of his tenure had been the ability to attract the people that it had to come to live in Central Otago. He loved watching them grow, and there was a "beaut team" with the company.

Mr Hewett has paid tribute to his predecessor, thanking him for his years of "outstanding service" and also his strategic leadership, particularly as chairman.

During his time at CRT, Mr Heal had made quite a small business into a South Island "juggernaut" and he played a large part in the success of Farmlands - which is now chaired by Mr Hewett - by setting up "good bones".

Pioneer Energy was a great business model and a large chunk of its success was due to Mr Heal’s leadership, alongside Mr Jonker, Mr Hewett said.

When it came to the company’s future, Mr Heal believed it had a "pretty good chance" of being a national leader in the waste energy space.

He was particularly excited about the Reporoa joint venture which, as a result, other cities were now making inquiries.

He believed it would continue to lead the way in the renewable carbon sector and, with diversification, it had the ability to leverage that up and down the country.

One of the scariest things was the future of Tiwai aluminium smelter. The announcement by Rio Tinto in early July that it was planning to shut the smelter in August 2021 was one that had "kept us awake", given a lot of its generation assets were in the southern part of the South Island, he said.

Pioneer Energy had been both a lot of work and a lot of fun, and while he would certainly miss it, he would also "switch off".

Mr Heal, who continues as chairman of Auckland-based Pulse Energy which is 49% owned by Pioneer Energy, is also chairman of Breen Construction and Road Transport Logistics.

Earlier this year, he was appointed chairman of Alliance South, which co-ordinates the activities of the Southern District Health Board and WellSouth.

Passionate and proud about Otago and Southland, he hoped he had made some contribution to his community.

When it came to his own career, he acknowledged he had been "really lucky".

"Hopefully, I’ve kept my feet on the ground," he said.