By Nina Foley
0 Comments
A Dunedin start-up is solving the nightmare of organising flat furniture - and cracking students up while doing it.

Former Otago University students Angus Syme and Cameron Leigh co-founded what is now known as The FlatPack Company while in their first year at Cumberland College residential hall in 2018, where they lived two doors apart.

Their business is about taking the "fladmin - flat admin - out of flatting, by delivering students their beds on move-in day.

The products come in cardboard boxes that stand no taller than the founders themselves and take a mere 15 minutes to assemble.

Mr Leigh and Mr Syme said they took a punt after identifying a gap in a market they themselves belonged to.

"We just bought all of the second-hand beds for sale in Dunedin and stored them altogether and sold them to everyone in Cumby [Cumberland] and Arana and Unicol [residential halls].

"Demand was through the roof," Mr Syme said. 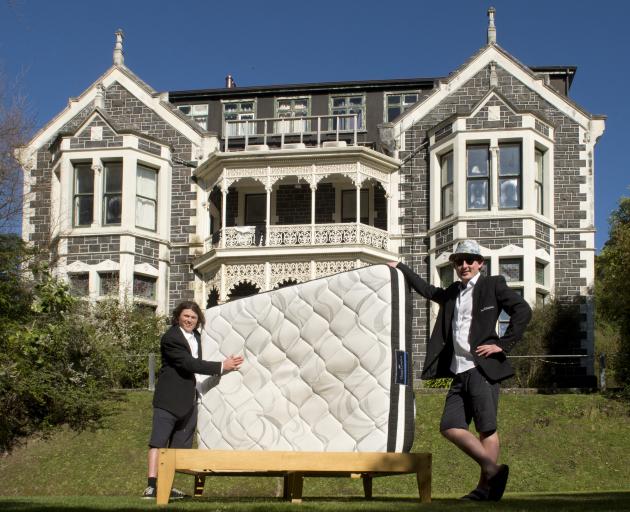 Showing off one of the beds sold to students in Dunedin by The FlatPack are Bryn Fredheim (left) and Ryan Forlong, who market the business by making viral videos. PHOTO: GERARD O’BRIEN
They then decided to pursue brand-new beds, getting in contact with manufacturers from China and Malaysia "to find where all the affordable beds are made".

With little business experience apart from the accountancy and finance degrees Mr Leigh and Mr Syme were respectively studying at the time, there was much trial and error.

The gamble paid off, the company going from selling 30 beds in its first year, to being on track to sell 3000 this year.

They put a lot of their success down to marketing.

"We quickly realised that we weren’t funny enough to do it, so we went looking for two funny-as people," Mr Syme said.

As it turned out, what they were looking for was quite literally right on their doorstep, with flatmates Bryn Fredheim and Ryan Forlong employed to do a give-away video this year.

"As soon as they made one video it just went viral.

Mr Forlong said making the videos was a lot of fun.

"The best part for both of us is that it doesn’t feel like work. We just loving acting like big kids."

The videos have included a Wild West stand-off, taekwondo on the beach and an impressive gymnastic floor routine.

The marketing pair along with Mr Syme all flat in the famous Transit House, now the backdrop of many of the viral creations stemming from the marketing team.

Mr Syme attributed the success of the business to Dunedin’s unique culture.

"The culture in Dunedin is second to none in terms of how accepting other students are of people willing to stick their neck out and do something.