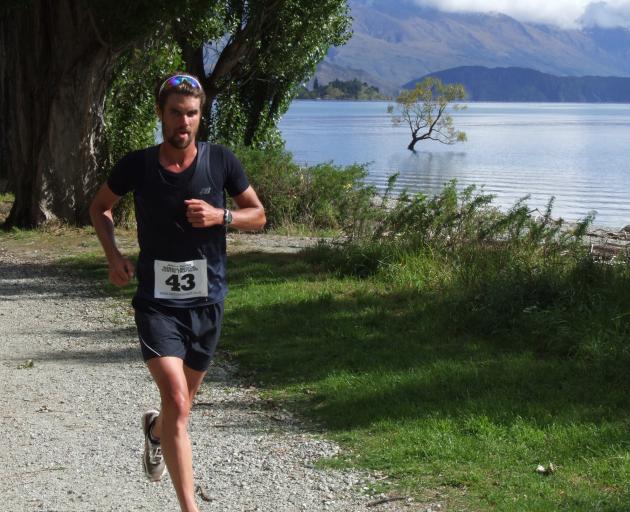 James Elvery runs home to win the team section of a culminating race at a three-day multisport event in Wanaka in March 2011. PHOTO: ODT FILES
When James Elvery saw a problem in his sport, he set out to fix it.

For the past seven years, he and business partner Dylan McNeice have been developing RaceRanger, two electronic devices which were attached to the front and back of a cyclist’s bike to detect draughting.

Draughting, which was banned in most triathlons, occurred when a cyclist moved into an area of low pressure behind another rider, reducing the wind resistance and the amount of energy required to pedal. It could only be policed by someone riding on the back of a motorcycle following the rider, which required a lot of "guesswork", Mr Elvery said.

He spent 15 years representing New Zealand on the overseas triathlon circuit before returning to settle in Wanaka with his wife and three children in 2012.

Mr McNeice, based in Christchurch, was also on the world triathlon circuit competing for 15 years before retiring last year.

The pair both saw the need for a solution for draughting, and had being working on RaceRanger since ever since.

This week, RaceRanger, with international triathlon body, World Triathlon, is to start trialling the technology at races.

RaceRanger would provide the devices, rather than selling them to event managers.

"We supply the devices and then take them away and charge them up for the next event," Mr Elvery explained.

The investment group was set up in May last year as a meeting point for startups and South Island investors who wanted to invest in southern businesses.

RaceRanger’s capital-raising was its first, another three to be completed by the end of the year. Until now, RaceRanger had been self-funded and had support from Callaghan Innovation.

It needed capital to finish the development of the devices, fund test runs and engage with event companies to get the product to market, Mr Elvery said.

RaceRanger might need to do another capital-raising to get it to the manufacturing point, he said.

The pair were pleased with the level of interest from possible investors. It was expected it would have to target those who had an interest in triathlons to get enough interest.

"For the most part they weren’t triathletes at all. It was interesting people who could see the problem and the value of the solutions," Mr Elvery said.

It was hoped RaceRanger would be used in New Zealand races next year and in Europe by 2023.