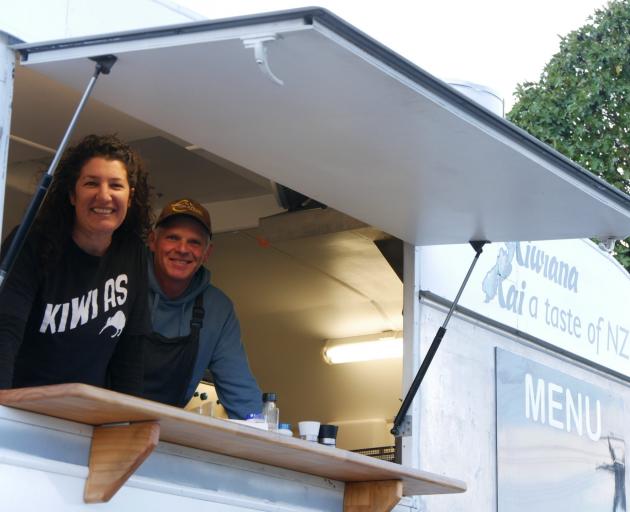 Rachel Kerr and Glenn Priddle have set up shop to sell true Kiwi whitebait patties. Photo: Oamaru Mail
Life is like a river.

There is a start and a finish, but the space in between can be unpredictable with varying currents, depths, surprisingly rocky areas and forks that may take you in a direction you would never expect.

That is what happened to couple Rachel Kerr and Glenn Priddle when the current took them from the depths of the West Coast to Hampden, south of Oamaru.

There, they have set up shop to sell true Kiwi whitebait patties.

It was never their vision to run their own whitebait business. They had dreams of travelling and had lined up jobs in the United States.

But life had other plans.

In 2017, Ms Kerr’s brother Tony and his wife, who owned the popular Curly Tree Whitebait Company, wanted to sell their business.

As Mr Kerr was struggling to hook any buyers and wanted to visit his family, who were setting up their new life in Rotorua, Ms Kerr and Mr Priddle agreed to look after the West Coast business in his absence. They agreed to stay on until it was sold.

A new buyer swam along in 2018, which would have been great news if Ms Kerr and Mr Priddle did not have 200kg of whitebait in their possession with no name to trade it under.

Rather than have it go to waste, they opened the Kiwiana Kai food caravan in 2019.

Part of their motivation was the travellers. They felt bad for tourists who shared horror stories of unauthentic or stingy whitebait patties being sold at three times the price.

Kiwis knew when they were getting cheated, but the tourists would not have anything to compare it with, Ms Kerr said.

“We almost took offence because we are very proud of the history,” she said.

“Our motto is ‘you shouldn’t be able to count the bait’.”

The West Coast was synonymous with whitebait, and it was something locals took very seriously.

Ms Kerr’s son, Cooper Sharplin, was the fifth generation in a line of South Westland whitebaiters, a tradition of connecting to the land Ms Kerr wanted to keep.

Living a remote life in the family bach, Ms Kerr and her partner relied on solar power, boiled their hot water, had a satellite phone reserved for emergencies, relied on old tapes of Kath and Kim for entertainment, and did not know the time or date on a given day.

“If our ancestors could do it.”

But whitebaiting on the West Coast was not the idyllic dream it appeared to be, nor was it a way to make a quick buck, she said.

She described one season of standing out in the rain, wind, and hail every day to catch only enough whitebait for one patty.

“You won’t see the hard work behind the patty,” she said.

“It’s not an easy pastime.”

And it was not without competition, either.

Eight years ago, you would be lucky to see six people on the river, but now there were about 150 people out there from the season’s first day, Mr Priddle said.

Auckland restaurants were also now buying whitebait by the tonne at $300 a kilogram, Ms Kerr added.

But there was a strong etiquette out on the river, which often operated by invitation only, she said.

“Obviously you can’t claim a river, but it’s a brave person to say that to a whitebaiter.”

Starting their Kiwiana Kai food caravan business did not come without setbacks. Two cyclones whipped through the West Coast, and they were not able to qualify for the wage subsidy when Covid-19 hit.

“We were just lucky it was a food caravan sitting at the top of the drive. It’s not making any money, but not costing any money either,” Mr Priddle said.

“If we were paying rent on a building we would have been totally screwed.”

As the West Coast’s tourism market struggled in the wake of the pandemic, they packed up and moved to Hampden.

“It was heartbreaking,” Ms Kerr said.

But you could either “complain about it or do something about it, Mr Priddle said.

The couple opened Kiwiana Kai in Hampden on Good Friday, continuing to source their whitebait from the West Coast.

In no way claiming to be chefs, the couple focused on making meals they would like to eat.

And they were offering more than just whitebait, serving burgers, a range of seafood, hot chips, and hot dogs.

“We are Kiwi-owned and Kiwi-operated, and we just want to give everybody a taste of Kiwiana,” he said.

“We have a big focus on the locals. They are the bread and butter.”