By Brent Melville
0 Comments
There are a lot of boxes to tick for the modern food manufacturer.

Increasing food safety standards and other compliance issues can be expensive and almost insurmountable, particularly for those on the first rung of the business ladder.

Enter Artisan Food Producers, a Dunedin-based incubator designed to provide a creative haven for those aspiring to develop and market their own food brands.

From chefs to beekeepers, vegan burger patties to Patti's ice cream, the idea is to bring people together, in a ''Petri dish'' style collaborative community, but aimed at foodies.

The concept is the brainchild of Vito Iannece and Penny Dawson, who as founders of Pasta d'Oro had grown their business over the past 30 years to be the largest manufacturer of pasta products in the South Island, employing about 13 skilled staff.

Some of that space was used to develop the new Artisan Cafe and Pantry, also serving as a retail outlet for local and imported specialty products and convenience foods.

''There are a lot of people out there with great ideas, developing healthy, natural products out of Otago.

''We thought this presented an opportunity to provide a workspace for people to use for their manufacture, getting them to the next stage of their businesses,'' Mr Iannece said.

While it was early days, Artisan had already signed up several cornerstone tenants, in Kiss Kombucha, Hammerhead Foods and Patti's & Cream.

Mr Iannece said ad hoc food producers could pay as little as $30 for a few hours on site.

For that, tenants had access not only to all the necessary accoutrements of a major food manufacturer, but also the manufacturing nous and network connections of the Artisan team. 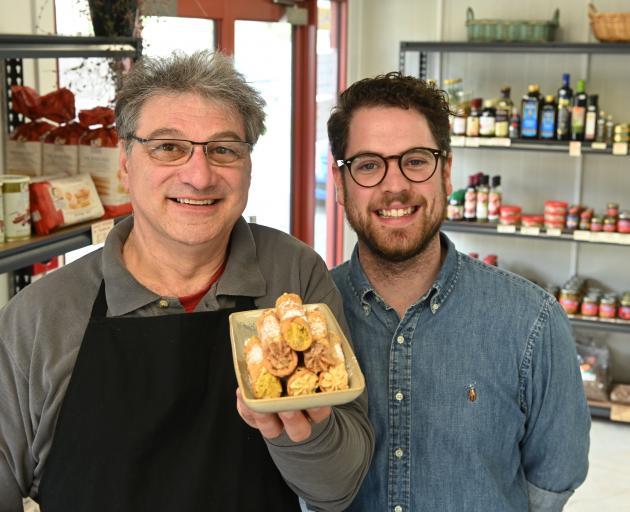 Artisan pantry owner Vito Iannece (left) and operations and marketing manager Charlie Buchan, with a tray of cannoli, which will become a ``signature'' dish at Vito's Cafe. Photo: Linda Robertson

Mr Iannece said the aim was to allow tenants and the food community access to a full suite of resources, including business planning.

''I like to think I'd learned a thing or two about the manufacturing trade over the last few decades, so my role really is to help people along the track,'' he said.

Mr Iannece's love of food and cooking was heavily influenced by his traditional Italian upbringing, and - of course - his mamma's cooking.

After he met Kiwi-born Penny in London, the two headed back to Dunedin.

The launch of Pasta d'Oro in 1987 meant he was able to marry his understanding of home style Italian pasta with Penny's entrepreneurial ideas.

To add additional value, the incubator had also recently recruited an operations and marketing resource in Charlie Buchan, who has a 10-year history in local hospitality as well as digital marketing expertise.

Mr Buchan is helping guide the upcoming launch of a new inner city cafe for the business, Vito's, in Rattray St.

This would act both as a satellite to Artisan's main kitchen at Kaikorai Valley and a retail outlet for Artisan tenants.

The early take up of the concept had also sparked the interest of an outside investor in Tony Cutler, part of the Cutlers Real Estate family.

Mr Cutler, who spent 10 years working as a professional chef, understands the struggles associated with the hospitality and food business.

He said the rental side of the business was not the end game.

''It's about recognising the scaleability of the business, growing from organic roots and providing an intermediary level so people have the confidence to develop their business without all the normal risk.''