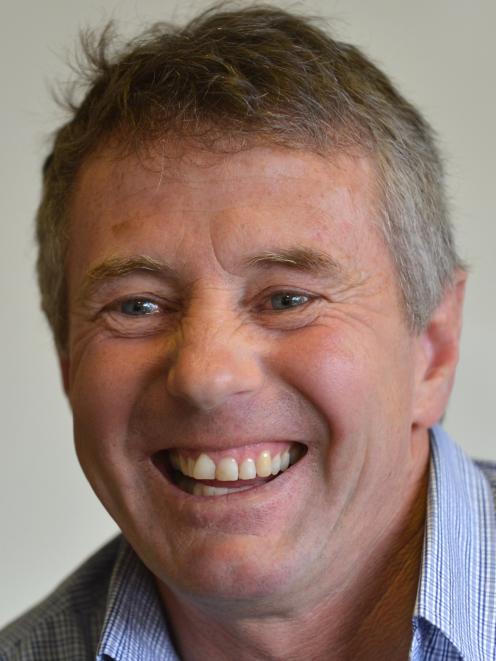 David Shaw
Buoyed by the quality of cashmere produced by goats on their Clinton farm, David and Robyn Shaw believe the fibre offers an ``amazing opportunity'' for New Zealand farmers.

For the past 35 years, they have been working quietly behind the scenes to now be producing fibre they consider of equal quality to the best in the world.

Both those companies were pivotal in developing possum merino blends for the luxury wool market.

The global cashmere market was expected to reach $US3.1billion by 2022. The industry had been growing at a constant annual rate of 3.86% and that was expected to continue for at least the next five years.

New Zealand Cashmere was offering the opportunity for like-minded farmers to work with them to develop the national flock into a ``resurgent, premium export industry''.

Mr Shaw developed a strong interest in cashmere fibre during his student days at Lincoln University in the 1980s and also studied goats in the United States.

Back then, cashmere was being touted as an industry with a future. By 1985, 500,000 goats were being farmed in New Zealand, peaking at 1.3million in 1988, but the industry imploded.

Mr Shaw had always liked the animal and its product, so persisted over the years, encouraged by genetic improvement.

It had been a long haul but the couple were excited about what they saw as the ``renaissance'' of a dormant New Zealand cashmere industry. Being prepared was the key, Mr Shaw said.

``We have seen the goat sector grow and then implode into a longer period of stagnation. Three years ago, we were faced with either giving up and losing years of genetic gain or creating a solution.

``For us, the decision was an easy one and it has taken us on an interesting journey. What hasn't changed is the demand, positioning and value of cashmere. In the prestige and luxury fashion world, it reigns supreme, and we want to be part of it,'' he said.

It was longer, whiter and brighter than cashmere sourced from leading producers in Mongolia and China.

That was interesting, because existing supply chains were facing headwinds and challenges brought about by overstocking, climate change and a resultant decline in quality, they said.

Their goats were farmed as part of an integrated livestock farming business and they had developed a productive, resilient, low-input and complementary farm animal.

After years of breeding and selection, the modern cashmere goat surpassed what they imagined was possible, Mr Shaw said.

``Thirty years ago we started with a few multicoloured `ferals' and today our goats are not only producing amazing fibre, they are integrated into our intensive beef and sheep finishing operation.''

They also played a key role in converting weeds without the use of chemicals and boosted the growth of natural nitrogen-fixing white clover.

``It all just adds to the natural, sustainable and regenerative New Zealand story. Robyn and I believe this is the direction we need to take to make farming future-proof,'' he said.

It was difficult to accurately establish goat numbers in New Zealand but killing figures were consistently between about 80,000 and 100,000 every year.

Initially, Mr Shaw was keen to start with about 25,000 goats producing the fibre, which was a very modest target. That would provide between about five and 10 tonnes of fibre ``coming through the system''. It could then be scaled up.

It was unlikely that a farmer would run goats as 100% of their farming enterprise. But the goats could be put into their farming operation and either replace some of their poorer producing stock or be complementary because of the ways they utilised parts of pasture, and also for weed control.

There were lots of opportunities for farmers to put goats into a farming system. Back in the ``boom days'', one in six farmers in New Zealand ran some goats.

Lessons had been learned from the industry's earlier implosion, including how to farm goats extremely well and integrate them into farming operations, particularly in beef systems and in the hill country, where there were issues around nutrient and sediment run-off, briar and wilding pines, he said.

New Zealand Cashmere was officially formed about 12 months ago to establish a better identity and and provide a fulcrum, or focal point, to grow the industry on.

It was at the stage now of taking it out to farmers to show them what the opportunity was. Obviously, goats were ``not for everybody'' but they did not need everybody doing it, Mr Shaw said.

What was missing in the 1990s was a market for the fibre. They had been building relationships and much research had gone into who to partner with to do some initial trials.

Fibre being processed at the moment would go through to yarn and, ultimately, into garments for testing.

Untouched World, founded by Christchurch businesswoman Peri Drysdale, had been using cashmere for some of its lines but it was all of Asian origin.

It made sense for its storyline to use fibre with New Zealand provenance and all the attributes that brought to the story, Mr Shaw said.