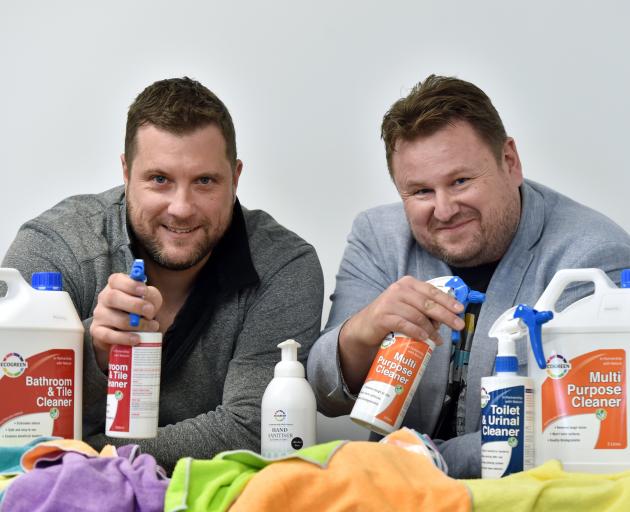 Andrew Wills (left) and Chris Mackle have founded a cleaning business that will return all profits to the community. PHOTO: PETER MCINTOSH
It is a newly launched business with a large dose of social entrepreneurship.

Dunedin-based The Big Clean will pay all profits back to the community through a charitable trust structure which allows customers to nominate their preferred cleaning project, whether it be the likes of a beach or park clean-up.

The business was established by Dunedin friends Chris Mackle and Andrew Wills with the philosophy that if they could remove the need to make a profit, they could pay their cleaners more — they have committed to paying at least the living wage of $22.10 an hour — and still be able to offer competitive rates.

"Part of the idea of creating this company is the belief that all people deserved to be treated fairly and with respect," Mr Mackle said.

Involved in tech since he was a "young whippersnapper", Mr Mackle spent eight years as information technology manager at Cook Brothers Construction in Dunedin.

Last year, he co-founded Wofo, a technology-based placement for people requiring work, which he described as "Tinder for workers".

A capital raising was being investigated for that business at present, he said.

Dunedin had been good to him and, while Covid-19 had been very difficult for many businesses, he was still in a comfortable position and wanted to "actually give back".

Some cleaning companies did not pay well and he believed it was time "for a bit of a shake-up". The term "ludicrously wholesome" had been coined for The Big Clean and he wanted to see people getting paid well for what was often a hard job.

"We want to provide the best possible service and also tick the heart box," he said.

The Big Clean performed residential, commercial and building cleans, as well cleaning for large-scale events — "and anything in between". In keeping with its philosophy, eco products were used.

The plan was to replicate The Big Clean in Christchurch, Queenstown and Invercargill by the end of the year and then target Wellington, Tauranga and Auckland.

"It’ll be fun. Everything’s about fun, isn’t it? When you do something that’s actually rewarding, it’s a different mindset," Mr Mackle said.

For him, the "warm fuzzy" aspect came from paying people well and helping to protect the environment was almost like a responsibility everyone should play their part in, he said.

Sky Sport Now to be bundled with Spark Sport