"We have got a huge amount of water. It’s just getting it to the right place at the right time and meeting a whole lot of expectations," she says.

There was no need for finger-pointing or throwing stones, but she did feel a sense of frustration in terms of how the issue has become such a "political football".

Labour’s announcement of a proposed royalty on commercial consumption of water — including farmers who rely on irrigation water — has been widely panned by primary industry organisations.  Mrs Hyslop joined that chorus, saying it did not seem to make any sense.

IrrigationNZ had ongoing discussions with Labour over the issue of a water tax, with two of its biggest concerns around what it was aiming to achieve, and  fairness. 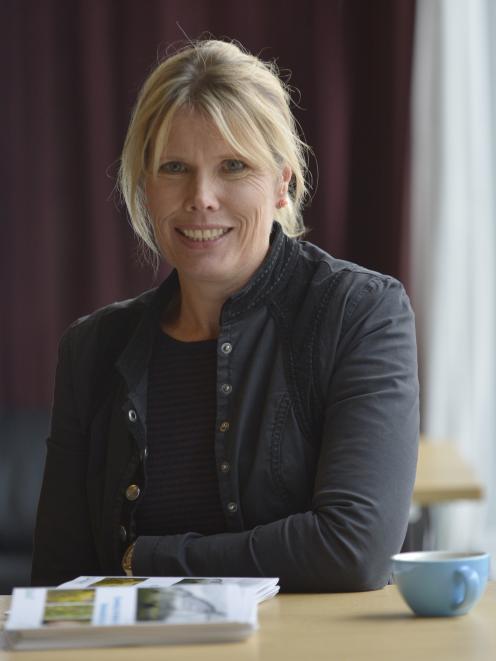 Nicky Hyslop. Photo: Gerard O'Brien.
While Labour talked about providing funding to assist with improving water quality, the most effective way of improving it on irrigated farms was for farmers to make changes on-farm and to invest in new technology,  she  said. That did not happen by taxing them, which would make them less able to spend money on their farms.

She also had some "huge" concerns about the cost involved in setting up such a system. Equally important was the fairness, or equity, of the proposal.

Water quality was an issue that was not just sitting around irrigated farms; it was sitting in towns and cities and in wetter areas,  such as  Southland and Waikato,  where there was not a lot of irrigating.

She questioned whether those farming in regions such as Canterbury and Otago, where there were large areas of irrigation, would be penalised.

Other consequences were also likely including increased food costs, as farmers would endeavour to pass on the costs inflicted on them.

"Why try and upset all the good work being done in this space, in terms of absolute commitment to improving water quality throughout New Zealand, by regional councils collaborating with their local communities and putting some really good programmes in place," she said.

There were some "absolutely tough" regulations coming up — some already in place — and farmers had to farm within limits.

She urged Labour to get a much deeper understanding of what was happening at ground level, rather than "sit in Wellington".

The benefits of irrigation in regions  such as  Otago and Canterbury had been "huge", Mrs Hyslop said.

Successive years of drought for those farming in drought-prone areas, without irrigation, affected them financially along with their confidence to make decisions and also meant they had limited ability to reinvest in their business.

Roll that out to businesses in the surrounding towns and the effect amplified. She recalled growing up through drought in South Canterbury in the 1970s and 1980s. For Timaru, it was "just like someone was starving it".

Resilience in the regions was wanted and it was rather ironic that Labour was talking about rural resilience "but they are going to knock it for a six".

Irrigation infrastructure was as important to regions as a good roading system was to Auckland, she believed.

Farmers absolutely expected to pay the cost of irrigation infrastructure but to land them with a huge amount of significant other bureaucratic cost was "nonsensical".

Brought up on a farm, Mrs Hyslop has always been in involved in the agricultural sector. She completed an agricultural science degree at Massey University and became a farm consultant, working in sheep, beef and deer.

Her involvement in irrigation governance began after she and husband Jonty moved to an intensive sheep, beef and cropping property, near Timaru.

Only a small percentage of the farm was irrigated with border-dyke irrigation and reliability was not good. At the time, it was a "screaming drought" and they were "going backwards".

The Opuha scheme was coming on board and they had an opportunity to take up shares. It was, as she recalls, "just a no-brainer for us".

They could see with the small amount of irrigation they had how much benefit they could get, they just did not have enough, and their systems also needed to be upgraded.

She was then asked if she would get involved as a director on the local scheme and it evolved from there. She was now also vice-chairwoman of Opuha Water.

About two and-a-half years into the Irrigation NZ role, Mrs Hyslop said she enjoyed it, but there was "a sense of frustration we’ve become a political football".

It was incredibly rewarding sitting around a table where there was a whole lot of different thinking and essentially, the end outcome was all the same — around sustainability, and good environmental outcomes. How to get there was where the robust discussion came in.

She acknowledged there had been some unintended consequences of land intensification and she also believed diversification would be important going forward.

From the public’s point of view, probably over the past five years they had heard that water quality was not in good shape.

But she suggested if the general public looked at local cases, they would see some big improvements, including  waterways being fenced off and riparian plantings.

"There are great local stories about really good things."

Some of the bigger issues, in terms of nitrates in streams and rivers, took longer to address.

There was also a misunderstanding about how much "Mother Nature" influenced water quality. She acknowledged intensive farming could cause algal bloom but there had also been algal bloom in rivers and streams "way up country" where there was no intensive farming, let alone farming.

One frustration she had was playing on the emotional attachment people had to water, but without getting the information right in behind it, accurately showing New Zealanders what the issues were, and what the solutions could be.

Not all intensive land use might necessarily be doing harm, but there were assumptions there, she said.

A huge amount of research was going into those intensive systems  such as  dairying and intensive cattle farming, and the technology in irrigation was exciting.

Investment could now be made in technology where it could accurately be established how much water needed to be applied at any one given point, and only enough water to allow plants to grow. There was also much good work being done in the agronomy space, with various plant species.

Mrs Hyslop said there were "so many" challenges ahead for farmers; they needed to take stock and make sure they were equipped for the future.

New Zealand had a "massive opportunity" when it came to producing high-quality, nutritional, ethical food.

Lab-produced food was "just around the corner" but, if New Zealand farming was smart and doing a really good job and behaving in a sustainable way, then the consumers that they wanted to be buying their food internationally would pay a premium for it.

"It’s about the provenance of our food. We haven’t been good enough at that . . . we need to be careful in the future to get on and do it," she said.