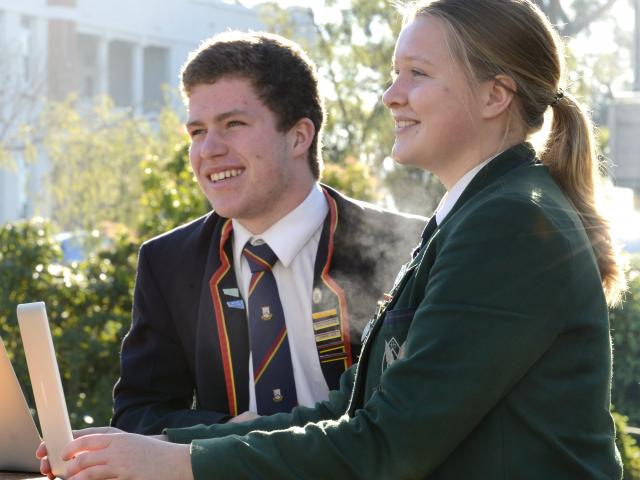 Jack McLaughlan and Isabelle Keeling (both 16) are enjoying studying agribusiness. Photo: Gerard O'Brien.
Growing up on a North Otago dairy farm,  Isabelle Keeling’s knowledge of the agricultural sector was limited to the dairy industry.

Taking an agribusiness course has broadened the Columba College pupil’s knowledge of the wider industry. Having never previously studied economics or accounting, Isabelle (16) has been learning about the likes of co-operative business structures and cashflow forecasts.

"I can understand what my dad’s talking about," she said, during a class at John McGlashan College this week.

She enjoyed a recent three-day field trip to Mt Difficulty Wines in Central Otago  and an opportunity to work in the vineyard and learn about every stage of the winemaking process, along with the business side of it.

"It was just really cool to see how it all works," she said.

John McGlashan and Columba have collaborated as lead schools in delivering the course, teaching it across both Dunedin campuses, as a Centre of Excellence for Agricultural Science and Business.

The initiative was the brainchild of St Paul’s Collegiate School in Hamilton, which joined with agricultural industry partners with the aim of delivering  an agribusiness programme to secondary schools throughout New Zealand.

It was designed to expose  tertiary-capable pupils to the wide range of skills required  in agriculture and the associated opportunities and career pathways.

The principal partners are DairyNZ and Beef and Lamb New Zealand, along with other business partners.

John McGlashan was  invited to become one of the lead schools and it invited Columba to be part of the trial with it.

There are 10 trial schools throughout New Zealand and the course  has been four years in the making.

It is being rolled out nationally next year and all secondary schools will have access to it. Dr Craig Preston, agribusiness director and science teacher at John McGlashan, said the course recognised the "massive" shortage of people in the agribusiness sector.

It was not only about training  farmers — who were obviously vitally important — but all the support people.It was moving away from just on-farm things that agriculture and horticulture courses focused on to beyond the farm gate.

That was reflected in the curriculum, with the likes of future-proofing the future, and it was very exciting, Dr Preston said.

The Mt Difficulty Wines field trip was very successful, and illustrated how the success of the course was dependent on industry experts helping out. The possibility of overseas trips was being explored.

His counterpart at Columba, Suzanne Bishop, said agribusiness was "for everybody", whether they were lawyers, accountants or retailers.

For pupils who studied languages, there were opportunities to go and sell agricultural products internationally.

"Every subject has a possibility to have a place in agribusiness," she said.

Since becoming involved in the programme, she had been amazed by how many opportunities there were in the sector.

"The world’s their oyster if they continue in agribusiness."

It was the best-resourced subject she had seen, which was because of the private industry involvement, Mrs Bishop.

She was particularly delighted with the Mt Difficult field trip as it brought the theory  to life and was relevant.

She wanted to arrange for pupils to spend time in local agribusinesses, probably in the school holidays, for mentoring, and she was keen to hear from any businesses that were interested. She was also looking for speakers to talk to the 15 pupils at Columba, who were all very talented, she said. Isabelle said she was unsure what she would do when she left school, but it was probably going to be something related to agriculture and the course had highlighted what was available.

Classmate Jack McLaughlan (16), from John McGlashan, said the course was very interesting and he had been learning many new things. He was looking at the possibility of studying veterinary science when he left school, he said.