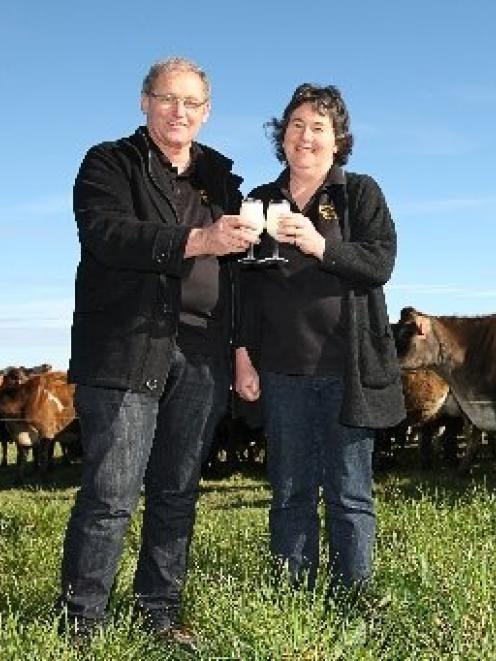 Robin and Lois Greer, of Retro Organics. Photo supplied.
Southland dairy farmer Robin Greer always had a desire to process his own milk.

He did some research and spent one day a week for 18 months in his kitchen, making cheese from recipes he found on the internet and in books.

He taught himself to make most of the cheeses now produced at the factory he and his wife Lois established on their farm.

They market their products - milk, cheese and yoghurt - throughout New Zealand, under the Retro Organics label, and are looking at export opportunities.

Mr and Mrs Greer were both still at school when their fathers died, which influenced the direction their lives took, Mr Greer told the recent Business Side conference in Dunedin, held in conjunction with the South Island Dairy Event.

Mr Greer had to leave school following his father's death and he started an apprenticeship at a butchery, before getting a job milking cow

After sharemilking for 12 years in Waikato, the couple headed south, purchasing 80ha at Tuturau in 1992.

They later bought additional land and now own 300ha and lease 180ha.

This season, the Greers are milking 350 cows organically and another 500 cows on a conventional farm.

While the overall plan was to have the entire operation organic, they had to be cautious, Mr Greer said.

It had been a steep learning curve and he was still learning how to farm organically. As a dairy farmer who started off as a butcher, there were a lot of skills to learn.

He believed much could be learned from the organic farming sector that could help conventional farmers farm smarter and in a more environmentally friendly way.

While he did not believe every farmer should be certified organic, there were some things conventional farmers "could certainly learn".

The main reason for the couple going organic was losing their fathers to cancer.

They did a lot of research and there were a lot of chemicals within the food chain that were not helping people's health, Mr Greer said.

While they never set out to be organic farmers, they wanted to "take some of the baddies out of the food chain".

The couple visited nine dairy factories in Australia to help with the design, a trip which proved helpful.

The most challenging part of the set-up stage was dealing with "bureaucrats" who "caused me more headaches than I ever believed possible", Mr Greer said.

They have a range of 15 cheeses and a further three cheeses are being developed with the aim of launching them later this year.

The company was the first to market lactose-free cow's milk and yoghurt in New Zealand.

The company did a lot of business in Christchurch before the earthquakes. Its two biggest customers had their businesses "demolished" and it was a "big hit" for the company.

However, it had recovered well in the city and it was once again a significant market, he said.

In the three and a-half years Retro Organics has operated, the company had gained 10 medals at the New Zealand cheese awards and three at the world Jersey cheese awards.

Although their products were BioGro certified, the "No 1" reason customers bought them, was because they liked them, Mr Greer said.

The second reason was people wanted to buy products from small businesses with traceability. They could see photographs of their cows, of their farm and of them.

There was a market sector that wanted that and while it was not huge, it was big enough for a small business like Retro Organics.

Their main customers were people with young families who wanted food they could trust.

While the couple had very good staff in every aspect of their business, Mr Greer said he still had a big input.

He spent time dealing with farm issues as well as developing the factory. He did the product development and marketing.

Mr Greer admitted he loved a challenge and the business had been a "hugely bigger" challenge than he first imagined.

It was rewarding to develop a product and get it out in the market. Getting positive feedback from customers was "really quite something".

That was something he believed, as an industry, New Zealand farmers missed out on.

New Zealand farmers produced some of the best food in the world but never really got the feedback they deserved.

It was such a shame New Zealand's dairy industry was held in higher regard offshore than at home.

Mr Greer wanted to produce a niche product and did not have any desire to grow a "huge" business, saying a business did not have to be big to be profitable.

Most of their milk still went to Fonterra.

There were three other people employed in the factory and he believed there was potential for a further 15-20 jobs at the factory as it got up to capacity.

Asked how he kept going through the various challenges he had faced, Mr Greer said he was stubborn but, most of all, he was passionate about what he did. The couple also had a great group of friends and colleagues supporting them.

Their dream was to develop a family business and two of their family were now working in the business.

If any member of their family was passionate about the business, they could carry it on, otherwise it would be sold, he said.

They would have to be passionate about it or it would not succeed.

"You must be passionate about what you do and enjoy it."

The dairy industry had given many dairy farmers great opportunities to grow their businesses and he was proud to be part of a great industry.

He had some concerns about the future and said farm owners needed to consider the next generation of the industry.

During the project, Mr Greer admitted the couple lost sight of balance in their lives and they were now trying to regain it.