Dunedin City Council-owned Dunedin City Holdings Ltd (DCHL) has released the results for the full year to June 30 for six of its eight companies, of which four recorded after-tax profits.

The largest was City Forests’ record after-tax profit of $36.87 million, well ahead of last year’s $12.7 million.

That was largely due to increased harvesting activity, which caught up with the volume lost due to last year’s Alert Level 4 lockdown.

Major contract wins saw utility service business Delta record a net profit after tax of $4.6 million, up from $1.9 million the year before.

The company’s total revenue also increased 5% to $105.4 million for the year. 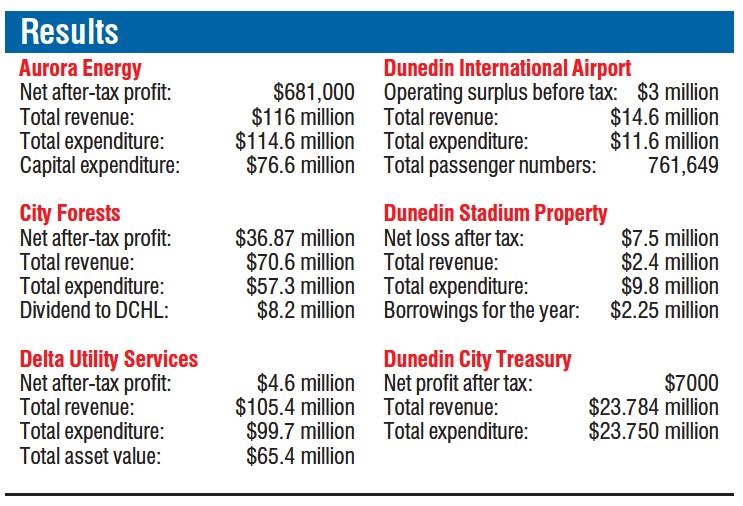 Despite passenger numbers being down 25% on pre-Covid-19 years, Dunedin Airport recorded a before tax operating surplus of $3 million, which was nearly $650,000 ahead of the prior year.

About 760,000 passengers passed through the airport, compared with just over one million in 2019

The only company to not turn a profit was Dunedin Stadium Property Ltd, posting a loss of $7.5 million.

The group had been expecting to have a challenging year, especially after March 2020’s nationwide lockdown, but each business had positioned itself to be able to continue operating.

"We all learnt a lot from the first phase of Covid-19 and the businesses embraced the changing environment they had to work in," he said.

Covid-19 and associated restrictions had had varied impacts on each business.

The airport and the stadium company had lost almost all of their revenue when people stopped travelling.

However, it was different for Delta and City Forests, which could put operations on hold and make up that revenue when restrictions eased.

While this August’s lockdown and effects of Auckland’s closed borders were outside the financial year, they were expected to have an impact on the businesses, Mr Cooper said.

As Aucklanders began travelling again and sport events and musical artists returned to Dunedin, both the airport and the stadium were looking at a "bumper year" ahead, Mr Cooper said.

Results for Dunedin City Holdings Ltd - which consolidates all of the group’s results - Dunedin Railways Ltd and Dunedin Venues Management Ltd were not yet available, due to delays in completing the audit of the financial statements.