By Riley Kennedy
0 Comments
It is mission accomplished for Abalro Health.

Last year, the Young Enterprise Scheme (YES) team from Dunedin’s Bayfield High School was second in the national final. This year, the young entrepreneurs were determined to win.

On Wednesday night, they got their redemption and were named company of the year in the scheme’s national final held virtually.

The berries, high in antioxidants and vitamins, had not previously been used commercially in New Zealand, the team said.

The team took the judges’ advice from last year which was to expand the credibility and professionalism of the business.

"Ever since then we have been so motivated to try even harder this year," Robert said. 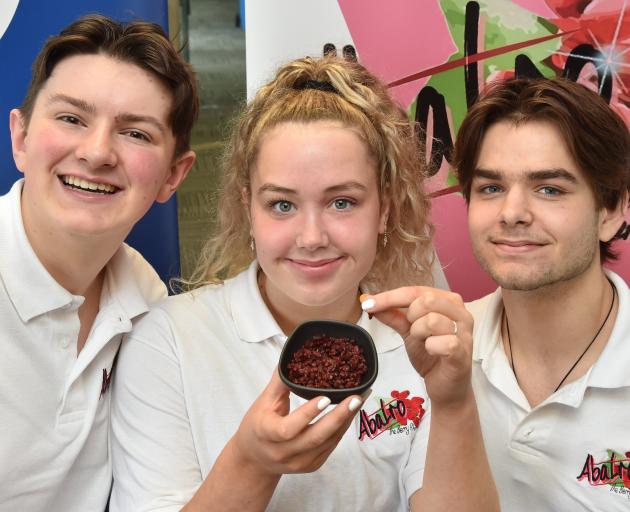 Abalro Health founders (from left) Robert Donohoe (17), Abby Green (18) and Alex Livingstone (18), all of Dunedin, hold a bowl of their imported barberries. PHOTO: GREGOR RICHARDSON
The trio were "over the moon" with win.

The team was awarded $3000, as well as a $5000 Massey University business school scholarship for each director, for its win.

At the start of this year, Abalro’s products had only been stocked in one Dunedin store, but they were now stocked in 81 health stores and pharmacies throughout New Zealand as well as online.

Next year, the team planned to continue to expand the business and they were trying to find suitable export markets.

They would do that at university; both Abby and Alex were staying in Dunedin to study a bachelor of entrepreneurship at the University of Otago, while Robert would work remotely from Auckland where he would be studying medicine.

At the end of next month, the trio would head to Expo 2020 in Dubai for just over a week as New Zealand’s youth ambassadors for the Global Kaitiakitanga Project - a programme run by New Zealand Trade and Enterprise and YES.