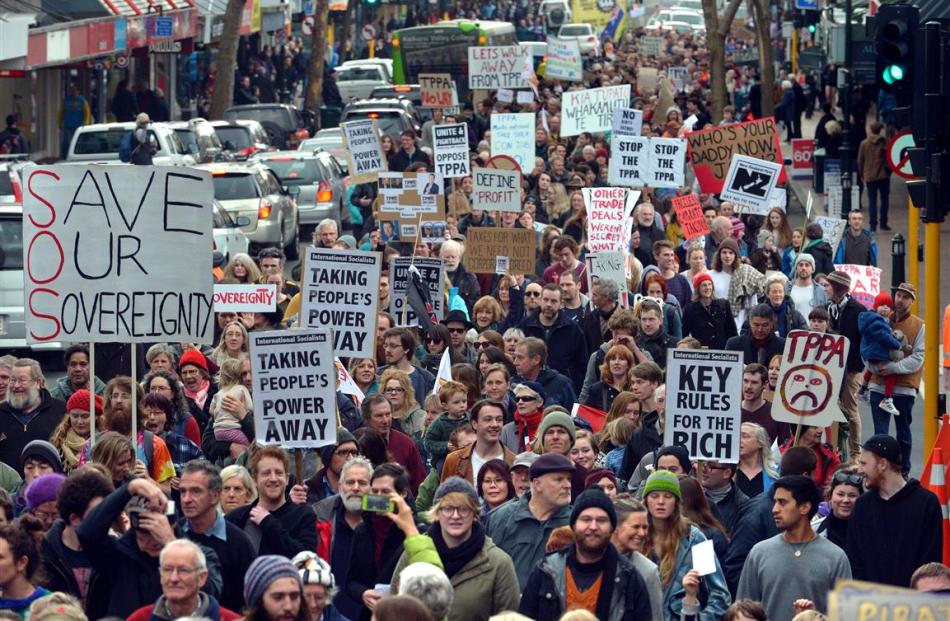 It is striking how little the Trans-Pacific Partnership will deliver to New Zealand, a study released Friday says.

"The Economics of the TPPA'' is the fifth in a series of peer-reviewed papers on the implications of the TPP.

The study says that without the TPP, the economy, as measured by gross domestic product, would grow by 47% by 2030 at current rates.

"Even that small benefit is a gross exaggeration.

"The modelling makes unfounded assumptions and the real benefits will be far smaller. If the full costs are included, it is doubtful there will be any net economic benefit to the New Zealand economy.''

The TPP was not a gold-standard agreement.

Extensive barriers to agricultural exports into the Japan, Canada and the US remained and were now locked in under the agreement.

The TPP had failed to tackle agricultural subsidies, which heavily distorted trade.

The TPP had undermined negotiations at the World Trade Organisation, which was the only viable forum for removing those subsidies, Mr Coates said.

Co-author Geoff Bertram, a senior associate of the Institute for Policy and Governance at Victoria University, said the investor-state dispute provisions, combined with restrictions on state-owned enterprises, would deter future governments from passing regulatory and industrial policies in the public interest for fear of litigation by corporate interests whose profits were threatened.

The essence of the chilling process was the threat, not necessarily the actuality, of repercussions.

The last-minute exclusion of big tobacco from the TPP dispute process only grazed the tip of a very large iceberg.

The paper was co-authored by Dr Bertram, Mr Coates, University of Auckland professor of economics Tim Hazledine, business journalist Rod Oram, and peer-reviewed by Prof John Quiggin, an economist at the University of Queensland.

It said the TPP was likely to reinforce New Zealand's position as a commodity producer and hinder progress up the value chain to where greater economic prosperity lay.

The paper said the TPP read like a charter for incumbent businesses, with US companies to the fore.

Earlier this week, the Government was accused of failing to meet the obligations to Maori in the TPP.

Professor Jane Kelsey, a long-time opponent of the trade agreement said the Government appeared to believe all it needed to do was insert an inadequate Treaty of Waitangi exception to absolve it of having to meet its Treaty obligations.

"The Crown's approach is a breach of the Treaty in itself,'' she said.

However, Trade Minister Todd McClay said nothing in the TPP would prevent the Crown from meeting its obligations to Maori.

"As with all of New Zealand's free-trade agreements since 2001, TPP includes a specific provision preserving the pre-eminence of the Treaty of Waitangi in New Zealand.''

The value of the Maori asset base was now more than $40billion, with significant ownership in key export sectors such as red meat, dairy, kiwifruit, forestry and seafood.

Maori stood to benefit from the tariff savings under the TPP - estimated to be worth more than $200 million a year once the tariff commitments were fully phased in, Mr McClay said.

Mr McClay said the Treaty of Waitangi exception was in addition to other clauses in in the TPP that were designed to protect the ability of governments to make legitimate public policy, including in health, education and protecting the environment.

"Being part of TPP - which covers 36% of global GDP, and takes 40% of our exports - is strongly in New Zealand's national interest,'' he said.

The 12 countries account for 36% of the global economy and more than 40% of New Zealand's exports - $20billion in goods and $8billion in services. The TPP will be New Zealand's first free-trade agreement with the US, Japan, Canada, Mexico and Peru. More than $12billion of New Zealand's good and services are exported to those five countries.