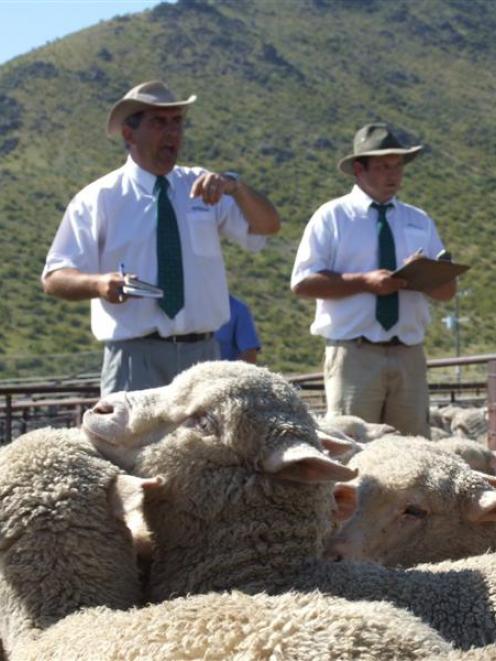 Mark Yeates (left) and Barry Fox, from PGG Wrightson, look for bids at the Omarama merino lamb sale in February. Photo by <i>ODT</i> files.
Reasonable conditions this lambing should see a rise in the total number of lambs by 2 million - up 8% - pushing export lamb production back towards 20.5 million head in 2011-12.

Export lamb production in 2010-11 was expected to finish at about 19 million head, down 11% on the previous season, according to the ANZ Agri-Focus report for July.

Snow, rain and wind hit the South last September, claiming the lives of a million lambs, while the North Island was also affected by wet, cold weather during lambing.

Lamb weights were hitting record levels, which was providing an offset to the lower number of lambs, the report said.

Higher store prices for lambs and ewes and wet weather had seen a drop-off in the kill figures over the last month.

Sub-clinical facial eczema and worm burdens might have also had a bigger influence than first expected. Recent South Island scanning results have been better, providing an offset.

The national average lamb weight was likely to be finished about 18.2kg this season - above 18kg for the first time and 3% up on last year.

Year-to-date wool exports for 2010-11 were down about 7.5% on last year to 114,000 tonnes. As farmers "took the money and ran earlier" in the season, export volumes had dropped off 25% to 30% in recent months as lower sheep numbers "come home to roost", the report said.

"With this reduction in sales activity coming during the height of their lamb production, it creates the need for the UK to export greater volumes in the EU continental trade, which is impacting upon general lamb prices in these markets," the update said.

While New Zealand was exporting very low volumes to the area at this time of year, it did affect future lamb prices.