All action at Holstein-Friesian conference 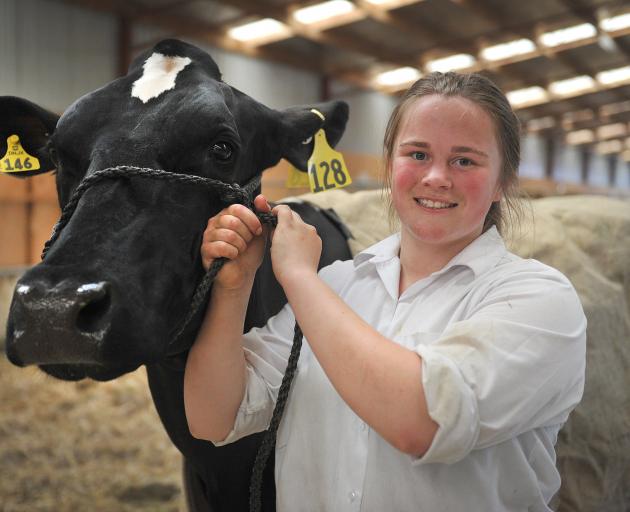 Teegan Hall, of Waianiwa, shows off her best in show Holstein-Friesian cow at the Otago-Taieri A&P Show earlier this year. Photo: Christine O'Connor
Holstein-Friesian breeders from throughout New Zealand will converge on Central Otago this week.

The New Zealand Holstein-Friesian (HFNZ) Association is holding its conference in Cromwell, organised by the Otago branch of the organisation.

The conference theme was High Octane: Gold, Wine and Speed, with various activities organised around that, and it was ''action-packed''.

Planning began about 18 months ago and organisers wanted to ''showcase'' what the region had to offer, Mrs Ray said.

It begins today with a trip to North Otago to visit Nathan and Amanda Bayne's Busybrook stud, followed by the official opening at the Goldfields Mining Centre.

More than 100 people were expected to attend the national awards dinner tomorrow night where members would compete for a range of awards for the likes of type, production, youth, showing and photographs.

A sale on Wednesday, will have 28 lots on offer, including a cow, in-calf heifers, calves and a pick of the flush. There would be ''something for everyone'', Mrs Ray said.

HFNZ's annual meeting was being held on Thursday.

Mrs Ray and her husband Stephen, who farm at Clydevale, had been involved with HFNZ for nearly 30 years and enjoy ed their involvement, she said.

It tended to fuel an interest in the breed, particularly in terms of trying to get the best out of the cows, and also there was the camaraderie involved.

Holstein-Friesian breeders made a significant contribution to the AI industry and she had ''every admiration'' for those involved in showing their livestock, helping keep the link between rural and urban, she said.

The Otago branch had about 25 members and was keen for more members.