Banking on meat and wool, but... 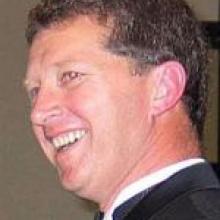 Charlie Graham
Bankers remain committed to lending to sheep and beef farmers, but that support is tempered by concerns about the sector's long-term economic performance.

That worry does not extend to suggestions on the direction financiers think the sector should take to improve its viability, but is largely confined to comments that leadership is needed, change should be driven by farmers, and an agricultural sector dominated by dairy is undesirable.

ANZ-National Bank's managing director of rural banking, Charlie Graham, does go a bit further, saying that despite high market prices for lamb, many sheep farmers are struggling to stay viable.

"One of the things everybody identifies that needs to be changed is the supply or value chain in the meat industry."

Farmers are again debating the future structures of the sheepmeat and wool industries in yet another attempt to improve the sectors' profitability.

Yet, despite a plethora of independent reports advocating co-operative ownership and changes in the way farmers supply their product, there is a reluctance to take that step.

Some, such as an estimated 26 Otago and Southland sheep and beef farmers who have started converting their farms to dairying and hundreds of others who have already done so, are voting with their feet.

Mr Graham said any change in ownership or how stock or product was supplied had to come from farmers.

"Ultimately, it's their industry."

He, like other bankers spoken to, was confident demand for protein would ensure the sector had a future, and would continue to lend to the sector, but said not all farmers were profiting from the current structure.

A look at the current supply chain made him question whether all those involved were adding value. He would like to see more collaboration and a structure that delivered the type of product required by markets and subsequent returns.

New Zealand farmers were in an enviable position of producing quality products that met the world's demand for safe, traceable product at competitive production costs.

"Ultimately, if we sort out the supply chain, then there should be a good future for the product."

There is widespread concern among rural lending managers that the dairy-sheep-beef balance could be swinging towards dairying, an observation also made by ratings agency Standard and Poor's, which, when warning of a potential rating downgrade for New Zealand, mentioned the risk of an undiversified economy.

Other bankers also spoke about the risk of an economy weighted towards dairying.

The BNZ's head of agribusiness, Tony Arthur, said it was important for New Zealand Inc that farming was balanced and not too heavily weighted towards dairy, but he believed prospects for sheepmeat and wool remained strong and, for that reason, the BNZ would not back away from the sector.

He did not have a view on what structure those sectors should adopt, but he would like to see greater leadership.

"Leadership needs to come from within the industry and then the sector galvanise behind a single view of what success and the industry's future looks like."

He believed that future was centred on profitable and sustainable farming families producing the best pasture-fed meat and wool in the world.

"I don't think this industry will be driven by any one particular part, the meat industry, banks or Government or industry."

Rabobank's New Zealand manager, Ben Russell, said his bank was not altering its attitude to leading sheep and beef farmers.

"We see it as a key sector in New Zealand agriculture and an important sector, and it remains a big part of our plans going forward. There is no question of Rabobank redirecting resources elsewhere."

Mr Russell said there were plenty of viable and profitable sheep and beef farmers who were generating sufficient cash flow to justify their investment.

But, for others, returns were insufficient to keep them in the industry, let alone grow their business. "There are enough farmers who are struggling to make money at the prices of the last three to four years that the incentive is there for people to exit the industry."

He declined to comment on whether the meat and wool structures were the cause of that lack of profitability, but said there was a risk that unless returns improved, sheep numbers would continue to decline.

Grant Abbott, ASB's rural manager, said in a statement that structural issues in the sheep and beef sector needed to be addressed by farmers working together with stakeholders, including meat processors, retailers and financiers.