Canola grower all in favour of friendly rivalry 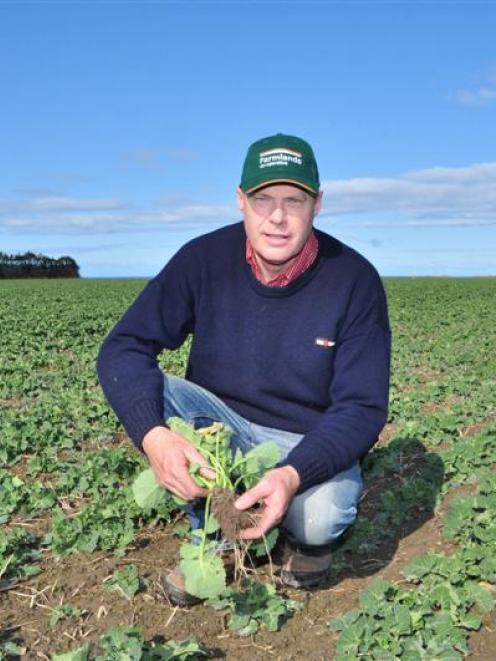 Chris Dennison examines a paddock of canola sown on his Hilderthorpe property. Photo supplied.
Competition is hotting up globally in the world of canola and even Guinness World Records is finally excited.

A few years ago, North Otago arable farmer Chris Dennison approached Guinness World Records (GWR) and suggested a new category for the crop, as a lot of canola was grown in the world and there was interest in achieving high yields.

But the response from the record officials was that it was of ''limited interest'' and they declined to act.

In January this year, Mr Dennison, who farms at Hilderthorpe, north of Oamaru, harvested an unofficial world record canola crop.

Running to the same criteria as outlined by GWR for wheat records, his 6.31 tonne per hectare yield beat the previous record set by English farmer Tim Lamyman on his farm in Lincolnshire the previous year.

Subsequent publicity of record yields, along with inquiries from journalists, meant GWR had now reassessed and opened a new category for canola.

It included strict environmental guidelines and monitoring, along with a required minimum area of 8ha. Any record yields must exceed a threshold of seven tonnes per hectare.

With a very good harvest season in the UK, Mr Lamyman recently broke Mr Dennison's record with a 6.8 tonne yield while, last week, that record was toppled by fellow UK farmer Steve Tuer at 7.2 tonnes, although it was uncertain whether he had registered with GWR.

Mr Tuer, who has a pig and cropping farm in North Yorkshire, told the UK's Farmers Weekly that the key to his double success - his barley yields also matched the UK record set in 1989 - to good weather conditions and well managed soil.

GWR insisted a crop must be registered before harvest and, preferably before planting, which might eliminate some UK growers from having their records validated this season, Mr Dennison said.

He had heard from farmers in Denmark who were also interested in attempting to break the record and he encouraged arable farmers to participate in the ''friendly rivalry'' between New Zealand and the UK.

''It may not be as prestigious as the Rugby World Cup, but it's a bit of fun for New Zealand arable growers and there is still a lot to be learnt about growing canola in New Zealand. Lessons learnt from growing high yielding crops can help all growers,'' he said.

New Zealand holds official world records for wheat and barley and Mr Dennison believed a New Zealand grower should be able to claim the canola record, as New Zealand's soils and climate lent themselves to growing record crops.

But it was not all smooth sailing. New Zealand growers faced more damage from birds than their UK counterparts and access to new varieties was limited.

Canola crops were sown in autumn and harvested in January and early February. Mr Dennison, who grows about 80ha of canola, said this year's crop was looking good.

In other years, winter and autumn flooding had been a problem. Although the winter had been cold, the crops had tolerated the frosts well.

If the crop looked very good near harvest, then an effort would be made to record the weights and area officially, as it was very hard to tell how a canola crop would yield without harvesting it.

''It would be a shame not to officially measure a crop and then find out it was a record breaker.''