The Catlins is a scenic location for a horse­trekking operation. PHOTOS: DAVINA NEALE/BACKCOUNTRY PHOTOGRAPHY
Being able to work outdoors in the spectacular Catlins environment, where she grew up, beats a 9 to 5 office job any day, Cara Meyer reckons.

She grew up on Te Taunga, a coastal South Otago farm farmed by her parents Bruce and Denise McGill, with its vistas of farmland, native forest and rugged coastline.

She and her two younger siblings, Heidi and Ben, were keen equestrians and she rode in many pony club competitions, A&P shows and other equestrian events.

A year’s exchange in Canada, after she completed her final year at Catlins Area School, was to push her outside her comfort zone and help her work out what she wanted to do with her life. 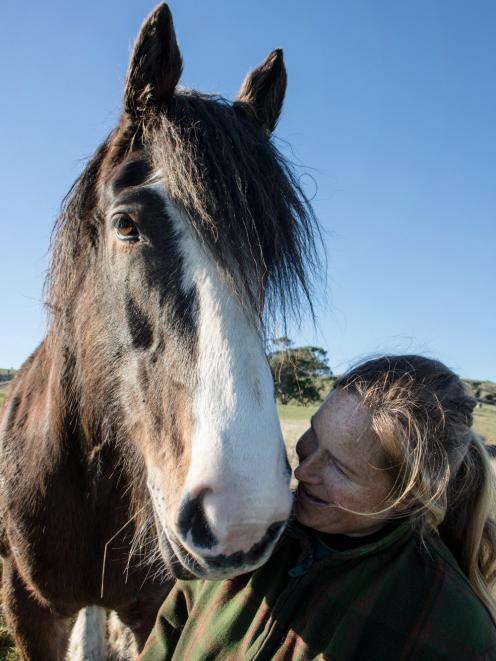 Cara Meyer, from Catlins Horse Riding, with Clydesdale-cross Angel.
It was while she was at school that it was established she was 100% deaf in her right ear, which made it difficult to listen and concentrate.

It was likely that she had become deaf either from birth or from an ear infection when she was a baby. While it was something that was ‘‘normal’’ for her, it had definitely created some challenges, she said.

Mrs Meyer went from a small, rural Owaka school, with several hundred pupils, to a class of about 200 in British Columbia. There were some similarities; the town was a similar size to Balclutha and it was also a reasonably remote area.

On her return from Canada, she had planned to head to the University of Otago and study tourism. However, the attraction of the zero fees scheme at the Southern Institute of Technology in Invercargill changed that plan.

She got a job on a dairy farm, combining calf rearing and studying part-time at SIT for a certificate in relaxation massage.

It was something ‘‘a bit different’’ but also something she had always enjoyed doing. She also did a course in adventure recreation at SIT.

That year in Canada made her realise what a special place the Catlins and South Otago and it made her even more passionate about the area and the family farm.

While working on the farm, she got a casual part-time job at the local backpackers, Surat Bay Lodge.

She decided to put a poster up on the wall to gauge if there was any demand for horse-riding and, from small beginnings, it grew from there.

She started with four horses and over the years, as the business grew, she bought more horses and gear.

It allowed her to be on the farm and bring in some outside income, combined riding and enabled her to share the area with people from ‘‘all over the world’’.

Coincidentally, when she looked back on her school yearbook, it asked what pupils saw themselves doing in the future. She said she saw herself owning a tourism business.

She spent some winters travelling and working in Australia and working for a tourism company out of Broome in 2007, working on a houseboat near Horizontal Falls, to which people were taken by float plane.

She worked long hours, quipping she reckoned she had cleaned more windows and toilets, and made more beds, than she had done before in her life.

But it was experiences like that she brought to her own business — ‘‘not necessarily study, just the life experience of travelling really opens your eyes to what’s out there and appreciate what we’ve got in New Zealand’’, she said. 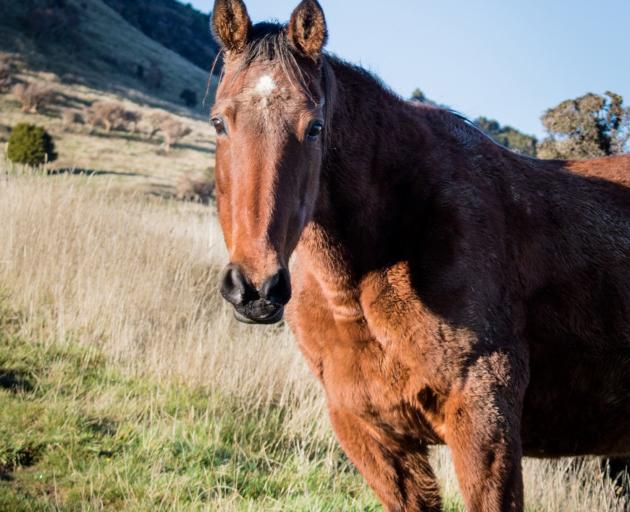 Star, the horse.
Mrs Meyer’s grandparents worked ‘‘incredibly hard’’ to buy the farm in 1963 and she was ‘‘really passionate’’ about the family farm.

She and her husband Neil, and their new baby Nelson, born at the end of August, were living in the house where she grew up.

They had a small block of land in the area where they intended to build a house. They had some sheep and cattle on their block and helped Mrs Meyer’s parents where they could.

Mr and Mrs Meyer were introduced at the Catlins River Festival where they ‘‘talked and talked’’ about Catlins and horses and bees.

Mr Meyer was a keen beekeeper and, quite by coincidence, several weeks before the festival, Mrs Meyer and her father had been talking about how bees would be beneficial to the farm.

When they met, Mr Meyer was living in a house bus at Harwood on the Otago Peninsula — which was fully off the electricity grid — and working for Delta.

He quickly realised that if their relationship was going to work, then living in Dunedin was not, so he got a job at Fulton Hogan in Balclutha.

Mr Meyer had about 20 beehives and most of the honey was sold to Taste Nature in Dunedin, while some horse-riding clients also acquired some.

Their honey was ‘‘basically a bush blend’’; a few years ago, they had some hives on a neighbour’s property in a flax row and they got some flax/ cabbage tree honey which had a distinctive flavour. While only a limited amount, it proved very popular, she said.

Horse rides were guided by Mr and Mrs Meyer, family members and close friends. Each ride was personalised to accommodate a range of experience and expectations.

People sometimes commented that she was so lucky to get to ride all day, but they did not see the behind-the-scenes work that went on.

Because it was ‘‘off the beaten track’’, most of their clients were ‘‘pretty genuine’’ and she had met some amazing people.

They included Europeans who had only ever ridden a horse in an arena and were overwhelmed at the opportunity to ride on the beach or around the hills.

Then there were children getting on a horse for the first time and older people who had never ridden but for whom it had always been a dream.

The business attracted about 500 people each year and Mrs Meyer said she did not want it to get ‘‘too big and commercial’’.

Mr Meyer was an animal person and, the first time she took him to meet the horses, he clicked with one which was soon following him around ‘‘like a dog’’.

He was also passionate about his Scottish heritage and the couple had bought Angel, a three-quarter Clydesdale.

Mrs Meyer loved her lifestyle, saying she could not handle ‘‘being stuck inside’’.

‘‘I need to be outside in the fresh air and have my space.’’

While working as a massage therapist in Dunedin, it was suggested she take on a hairdressing apprenticeship.

Her sister is a hairdresser and is involved in the fashion industry but Mrs Meyer said she was the ‘‘complete opposite’’.

‘‘I’m very casual and rural, I definitely wouldn’t want to wear make-up every day. Horses and farm animals don’t care what I wear,’’ she said.