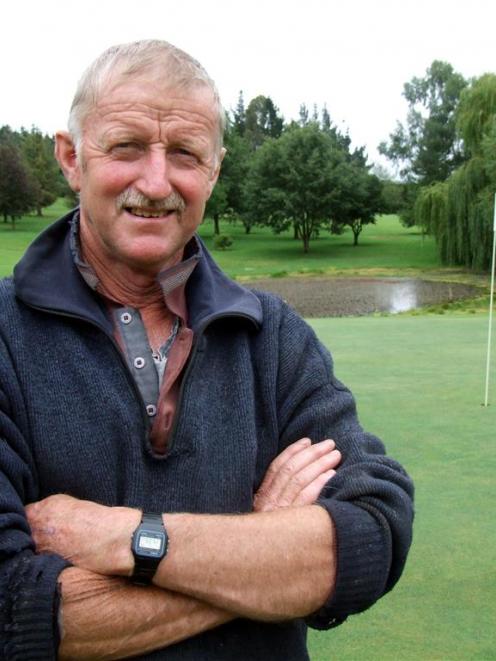 So preparing for this month's PGA Legends Tour, which is returning to Tokarahi for the second year, did not require an extraordinarily massive effort.

‘‘I try and keep the course up to speed all the time. There's a lot of little things you do to have it really tip-top,'' Mr McCone said.

Still, it was a fairly big deal for a small, rural club to host the Legends Pro-Am (NZ) event, which gave amateur golfers the chance to play alongside male professionals aged 50 or older.

Tokarahi, a nine-hole course in the heart of rural North Otago, hosted it last year for the first time, in a one-day event but, this year, it has been extended to two days, on February 12 and 13.

Mr McCone (63) volunteered to do a two-year stint as greenkeeper back in 1991. Apart from an 18-month break, he is still in the role.

He first started playing golf on the course in the 1970s, just a few years after the club was officially formed in 1967.

It came about through discussions among a group of local farmers, who decided to build a course on farmland, calling in some expertise from the nearby golfing fraternity in Oamaru to help design it.

The art of greenkeeping was not something he learnt overnight. There was still a ‘‘hell of a lot'' Mr McCone did not know, but he had picked up quite a bit over the years, he said.

An involvement with the Otago Greenkeepers Association had been very beneficial, including the opportunity to attend field days where he could extend his knowledge.

In 2012, the Tokarahi club was presented with an award for the best presented course in Otago-Southland, with the plaque now hanging in the clubhouse. It was nice to get acknowledgement from his peers, he said.

He estimated he spent between 400 and 500 hours a year at the course, which was a 20km trip from his home.

It was fellow club member Barry Matthews who came up with the idea of hosting the Legends tour, after he played in a tournament with a professional golfer. He asked, ‘‘Why can't we do that?'', Mr McCone said.

A field of 39 professionals and a total of 100 golfers took part last year, including 19 Australians.

This year, the professionals will play by themselves on the Friday and with the amateurs on the Saturday.

Mr Matthews had done a very good job of getting sponsorship of $20,000 (plus GST) for the prize money for the event. A small team was involved in organising the event and they all got on well together, Mr McCone said.

Feedback was very good from last year's players and that enticed the club to do it again this year.

‘‘You couldn't have got a better day ... it wasn't stifling hot, there wasn't a cloud in the sky, there was no wind. It was so pleasant,'' he said.

Like many other clubs, Tokarahi was struggling for numbers, which was largely due to the changing nature of the farming landscape.

But its members had a lot of fun and it provided a good social outing, he said.

The entire course was now irrigated, the club was financially sound, with no debt. It owned all its own equipment.

Trees were a particular passion for Mr McCone and his wife, Bronwyn, who have a nursery background. They have about 50km of shelterbelts planted on their farm which proved their value during recent dry conditions in North Otago, the trees helping foster grass growth.

Mr McCone has planted hundreds of trees and shrubs at the golf course, adding to its attractiveness. Spraying weeds was a regular pastime.

Although playing at Tokarahi was always enjoyable, he tended to always be looking over his shoulder and asking himself, ‘‘Have you done this, or done that?'', he said.

‘‘Sometimes you sit back and think, ‘That looks OK'. It's a bit like your farm ... you tend to work away and don't take the time to stop and look at what you've achieved.''

Mr McCone joked there was nothing worse on a golf course than a farmer, ‘‘because they come in with farming ideas''.

‘‘We're trying to grow turf here, not paddock grass, and there's a massive difference,'' he said.

These days, Mr and Mrs McCone farm beef cattle and Mr McCone, third-generation on the home farm, was happy farming for as long as he was able to.

A keen sportsman, he still plays tennis, although sport has been off the agenda while he waits for a shoulder operation.

Tokarahi Golf Club president Dick Watson said it was ‘‘fantastic'' to be able to host the Legends event again.

There was great support from both the club and the local community.

The course was looking very good, helped by rain and the extended irrigation scheme.

Next year, the Tokarahi club will celebrate its 50th anniversary. Mr Watson expects it to be a big occasion.