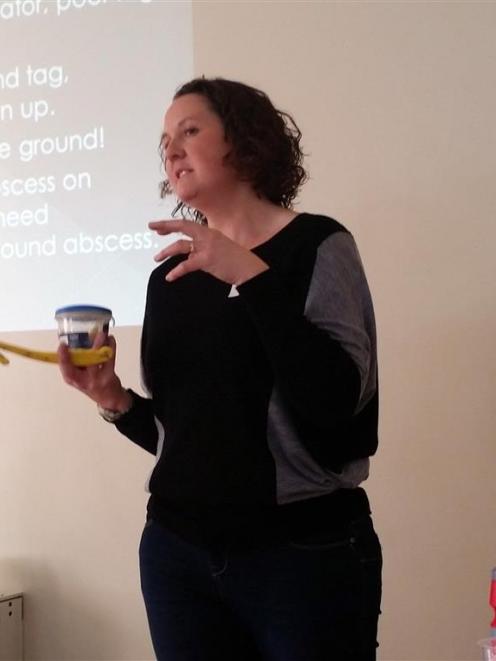 When North Otago dairy farmer, vet and mother-of-two Nicola Neal completed the two-day First Steps programme in 2014, it gave her a firm sense of direction.

The programme, developed by the Agri-Women's Development Trust, is specifically designed to help rural women understand and realise their potential.

It was developed as a result of the trust's research into the role of women in agriculture and the value of the skills and strengths they gained in their roles in farming, in their careers, as mothers and in supporting communities.

‘‘I came home with a real sense of clear head, a plan of what I want to do and how I'm going to do that. They [the facilitators] encourage you to set some grunty goals, real life-changing stuff. Not just easy targets,'' Mrs Neal said.

She did the course in 2014 when her youngest child was 2. For her, it seemed good timing as she was probably a little at a ‘‘junction'' in her thinking at that stage, with her various roles.

Her career as a large-animal vet was scaled back when she had children so there had been quite a lot of changes in her life.

It was a great opportunity to spend two days thinking solely about what she needed, rather than what the farm or family needed.

‘‘It really focuses on your own personal requirements ... The best way I can describe it, it's like strategic planning but for yourself,'' she said.

Strategic planning had been done on the farm, and she found that motivating and positive, so, when it came to herself, it felt the same, she said.

The two facilitators did an ‘‘amazing job'' and she believed it was excellent value for money for two days of full-on guidance.

She believed such courses were needed more than ever, given the challenges in the farming sector. On her course, there was a mix of dairy, sheep and beef and cropping farmers.

‘‘I just felt like it's cost-effective. You're becoming more efficient and better able to catch opportunities going forward.

‘‘They talk about a lot of barriers we make to doing things. A lot of those barriers are in our mind, not actual barriers at all.

‘‘I think a lot of us came out of [it] with a much bigger picture of what was possible and some really robust tools to go forward,'' she said.

‘‘They really made me think how easy it is to undervalue what you do when you're not being paid to do it,'' she said.

That could be on-farm not drawing a wage, or at home with children.

The facilitators tried to get the women to recognise the skills they were using, whether that was in running a household, being involved with the local playcentre or being on the school board.

All had skills that were transferable to paid employment if that was what the women wanted to do.

‘‘It really opened my eyes. In some ways, it made me realise it's easy to lose confidence when you're out of the workforce.''

It was also a treat, as a working mother, to sit and think ‘‘about your own thing for two days'', she said.

Originally from a sheep farm in Southland, Mrs Neal completed her secondary schooling in Dunedin after the family moved to Otago.

She had always wanted to be a vet and it proved to be ‘‘the most amazing career choice''. ‘‘It's honestly the best job you could ever wish for,'' she said.

It was while she was studying veterinary science at Massey University in Palmerston North that she met her future husband Grant, who was working for an animal health company.

On their OE, he announced he had always wanted to be a dairy farmer and it seemed quite an exciting opportunity, she recalled.

When they got a sharemilking job, Mrs Neal resigned from her vet job. Working together definitely came as a ‘‘shock'' initially but they had increasingly worked out how to do it.

The couple, who live at Papakaio, are now in their eighth year sharemilking, having advanced from a lower-order job to 50:50.

Working varied hours at Veterinary Centre Oamaru allowed her to balance family and farming commitments and she was grateful for that flexibility.

Working mostly in the dairy industry, with some equine and small-animal work, she relished being in such a physical job.

It was also an excellent way of getting off farm and talking to people. Talking to other farmers about their businesses and trying to solve some of their problems was something she enjoyed and found refreshing.

She also felt she had become a better vet over the years as she developed more skills and because she better understood the farming aspect. It also gave her an understanding of the pressures farmers faced.

With low global dairy prices and low milk price forecasts, there was definitely a feeling of anxiety within the dairy farming community.

But she and her husband were fortunate to live in a well-established dairying area with a ‘‘fantastic'' community and supportive network, Mrs Neal said.

‘‘Definitely in a situation like this, when people's chips are down, it's really nice to know people are looking out for each other,'' she said.

The couple had had a good season, having gone into the year with a firm belief the best way to survive the downturn was ‘‘just do the most amazing job we can''.

While unsure of their future plans, she expected they would remain involved in the industry. There was a multitude of different ways to do that, she said.

There were still some spots available on a First Steps course being held at the Glenavy Hall on March 14 and 15.