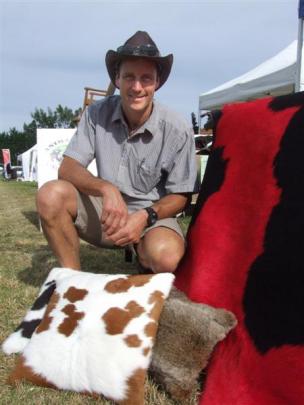 Adam Cowie, from Animal Skin Tanning Services, with some of his skins on display at the Southern Region Dairy Expo. 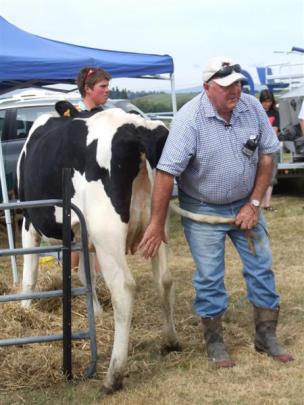 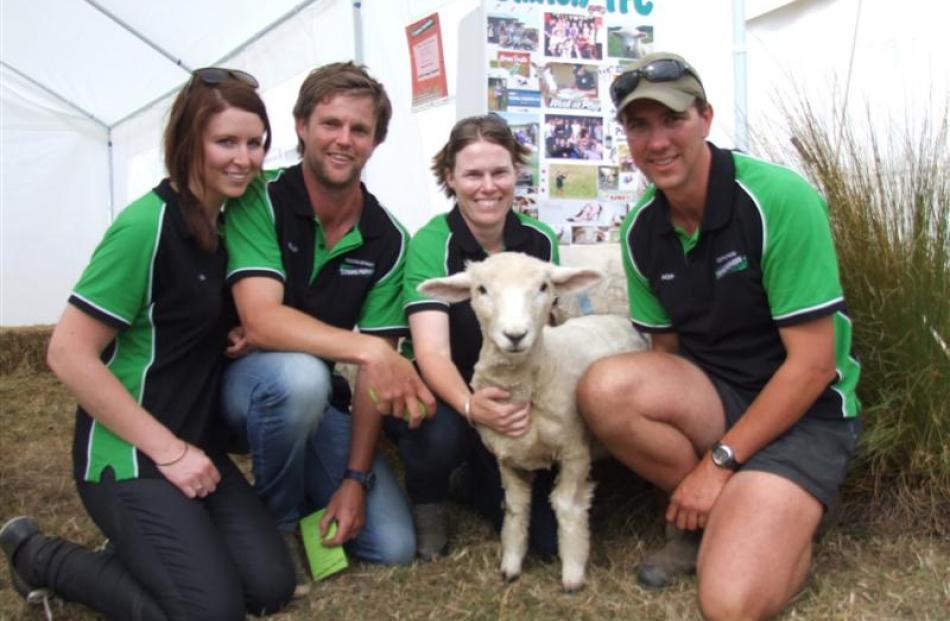 Question - what's black and white and red all over? Not necessarily a newspaper.

It could be a cow hide tanned by Southland man Adam Cowie, who established his own business about three years ago after working in a tannery for many years.

The event, organised by the Clutha Valley Lions Club, attracted a wide variety of exhibitors, selling everything from tractors and trailers to fertiliser and milking systems, pumps and stockfeed.

Among Mr Cowie's skins, which ranged from possum through to cow hides, was a spectacular bright red and black cow hide which he had dyed.

As far as he knew, he was the only person in New Zealand tanning hair-on cow hides commercially. Most cow hides were sent overseas salted from freezing works, where they were made into leather, he said.

Mr Cowie used to be technical manager at the Slinkskins tannery at Thornbury and he was always being asked by hunters and farmers if he could tan skins for them.

While that was not the tannery's core business, it made him realise that there could be a market there and, armed with a certificate in small business management, he decided to venture out on his own. People sent him skins to tan and he also processed some of his own.

''It's quite different, a bit unusual but people seem to like what I do. I try and tell people we eat the meat, I'm just making use of the skin as well,'' he said.

The business was building up slowly and he was getting a lot of good feedback. He operated from a small factory in Invercargill and employed a casual worker.

Cow hides took him a couple of months to process whereas deer, goat and calf skins took about a month.

Tanning had ''moved on a lot over the years'' in the chemicals that were used. While a lot of people told him how they used to do it with kerosene and baking soda, that did not actually tan the skin, rather it just dried it out, he said.

He enjoyed tanning deer skins the most ''because they're reasonably easy to do'' while cow hides involved a lot of heavy work.

Calf and cow hides seemed very popular at the moment for interior design and often featured in home interior magazines.

He hoped to expand the business and try to get more skins exported. He would also like to do a lot more work with possums and rabbits. Possum skins were the hardest to acquire ''because everyone's plucking them'', Mr Cowie said.

He also sold small tanning kits for people who wanted to have a go themselves. The kits included a DVD which showed him outlining the process.

Members of the South Otago-Clinton Young Farmers Club were embracing a black and white theme, appropriate for a dairy expo, by having a coloured sheep and a white lamb - appropriately named Mary - in a guess-the-weight competition.

The club, which boasted about 35 members, organised lots of different social occasions, including a ball every second year. It also ran a quiz in August in Clinton and, last year raised about $5000 for the Cancer Society running it.

President Andy Wells, a sheep and beef farmer from Clinton, joined the club about three years ago when he moved south from Canterbury. He thought it would be a good chance to meet new people.

The range of occupations among members was diverse and, along with farmers, included builders, teachers and vets. There was a good mix of both males and females, he said.

Craig Moffat, a sheep farmer from Te Houka, joined in 2004 when he returned home from Lincoln University. His father, Graeme, had helped restart the club in earlier years while his grandfather, Arthur, was a former South Otago district chairman.

Mr Moffat was second in last year's Otago-Southland regional final of the Young Farmer Contest. He enjoyed the social aspect of Young Farmers, he had met a lot of people, had many new experiences and had learned much, he said.

Emma MacDonell, a shepherd from Clinton, said she enjoyed being involved with ''like-minded people'' while Emilee Noone, originally from Waikouaiti and who is training to be an early childhood teacher, said all the girls she had got to know around the area were through Young Farmers.

The club was trying to find trophies from the ''old days'' and reinstate them for competitions such as dog trials, speech-making or debating.

They were always looking for new members and would love to be able to start up another club in the region.

Outram dairy farmer Denis Aitken was giving a demonstration entitled the Perfect Cow, a presentation that he has delivered throughout the country.

Mr Aitken's grandparents were dairy farmers on the Otago Peninsula while his father Laurie was also a dairy farmer.

While he originally fancied being a vet, he later decided to go sharemilking on the home farm on the Taieri and he and his wife Judy later bought that farm. Since then, they have bought eight other properties, mostly on the Taieri but including a large farm at Middlemarch which was used as a run-off for cows in the winter.

Sons Andrew and James were both now dairy farming on the Taieri, while daughter Jacqui is a PGG Wrightson dairy representative based in Outram.

Mr Aitken described himself as ''chief worker'' for his sons who were responsible for the day-to-day management of the farms. He also did a night shift for them during calving.

He said there was never any compulsion for them to enter the industry. In fact, Andrew was a mechanic by trade and James ran nightclubs on the Gold Coast for nine years.

It was their choice to go farming, although he admitted he was ''pretty proud'' they had all followed the family interest.

Mr Aitken spent three years as president of the New Zealand Holstein-Friesian Association in the mid-1990s and spent nine years on the council.

He was now chairman of the TOP (Traits Other than Production) advisory committee for the animal evaluation unit.

The Aitken family reared a lot of bulls for the dairy industry and they had exported cattle to Venezuela, China and Mexico.

Through the dairy industry he had travelled extensively around the world and attended the World Holstein-Friesian conference in Canada late last year.

The Aitken family has two Holstein-Friesian studs - Andrew has Broomfield, and James has Airdrie, which was named after the area where Mr Aitken's great-grandparents came from in Scotland, where they had Ayrshire cattle.

Stud breeding was more of a deep interest in the cow families. There was not enough emphasis put on the female line, which he rated as more important than the bull.

Membership of the Holstein-Friesian association had grown as people realised the value of a good quality cow.

Asked about the quality of dairy cows in New Zealand, Mr Aitken said matters to do with udders had been improved but there was work to do in the lifespans of cows to make them last one or two more lactations.

That would be done by having a correctly constructed cow, with the right feet and legs and with strength and capacity.

Mr Aitken, who had no plans to retire from the industry, had seen a lot of changes over the years, although he reckoned his father had probably seen more. Laurie Aitken (93) recently visited and when he saw a new electronic drafting system was ''just blown away''.

While he believed the future of the dairy industry would always be bright, one of his biggest frustrations was that there were more people studying art and design in New Zealand, than agriculture, he said.