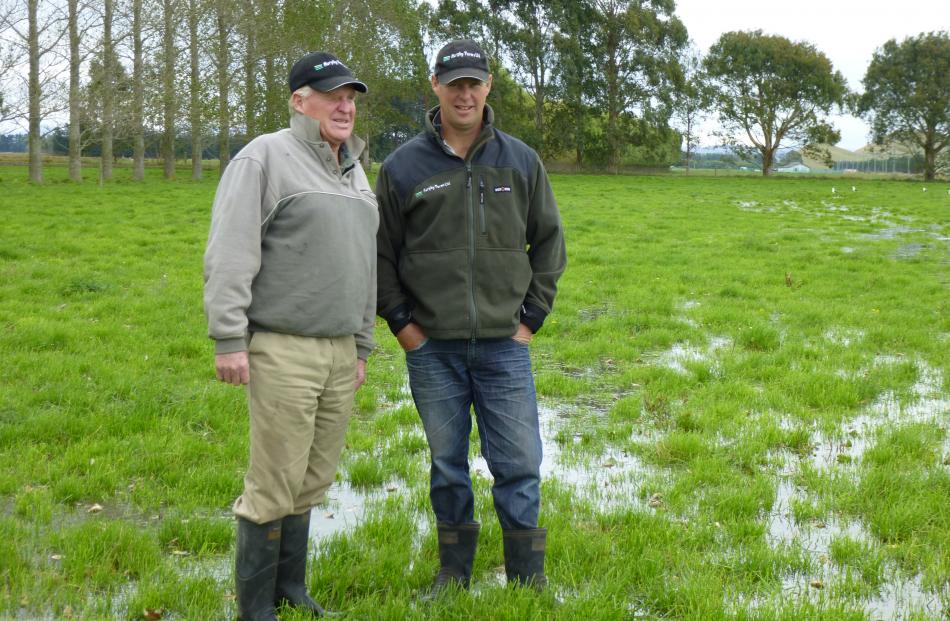 Robin Murphy (left) and son Bruce, who share in the running of the family dairy farming business have seen the benefits irrigation has brought, not only to production, but to the community and the environment. Photo by Ruth Grundy 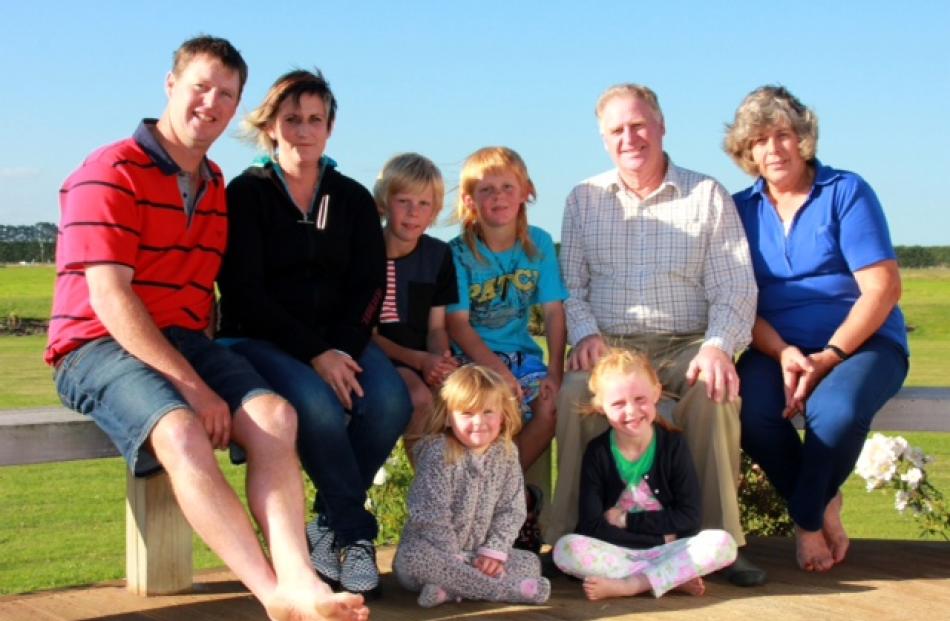 The Murphy family (from left) Bruce and Lesa, Jack (11), Lily (3) Harry (10), Katie (6), Robin and May each have a part to play in their dairy farming business near Glenavy. Supplied photo

May Murphy recalls an incident 30 years ago - she and her husband Robin were driving a friend, also involved in dairying, through Ikawai-Glenavy.

''When Robin told him: 'In time this will all be dairying' he thought he was joking - but it's happened,'' Mrs Murphy said.

Murphy Farms Ltd is run by Mr and Mrs Murphy together with son Bruce and daughter-in-law Lesa Murphy. Bruce and Lesa's children, Jack (11), Harry (10) Katie (6) and Lily (3) are part of the family firm.

Morven-Glenavy based, the business runs several dairy units, milking about 4500 cows on a 1180ha milking platform with equivalent to 800ha run-off in the Otaio-Maungati district - 1480ha is irrigated, mostly by the Morven-Glenavy-Ikawai Irrigation Company (MGI) scheme.

Beef and young stock form a major part of the wintering programme and most agricultural work is carried out in-house.

When Mr Murphy decided to go dairying it brought with it an interest in water.

''Water starts away back in my early life,'' Mr Murphy said.

He is MGI chairman, he is a member of the Waihao-Wainono Water Use Society; he is Environment Canterbury's Lower Waitaki South Coastal Canterbury zone committee chairman and, until recently, a member of its Southern Regional Committee.

He was on the Lower Waitaki River Management Society.

He has been a member of the Hunter Downs Irrigation Scheme since its inception and is a Hunter Downs Development Company Ltd director.

At 18, he leased land from his parents at Seadown and began milking.

When the couple married in 1968, they went into partnership and settled at Seadown, running the herd for cream supply.

Then followed a move to Ikawai in 1975 and they became one of only four farms in the area taking whole milk through to factory processing. ''It's grown a bit since then,'' Mr Murphy said.

''It was a big stepping stone; we never regretted it,'' Mr Murphy said.

They bought 200ha in a traditional sheep and beef farming area near Glenavy to convert.

These days they have taken a step back but a sound succession plan built around living trusts, integrated into the business plan and reviewed annually has smoothed the way for transition to the next generation and the ''business has continued to grow rapidly.''

There was no pressure on the grandchildren to become involved, Mrs Murphy said.

''But the opportunity is there for them, if they want to.''

Alongside building their own business, the Murphys have advocated for responsible and environmentally-sensitive development to a sometimes dubious community.

''I became hands-on because I saw the value [of irrigation and dairy development] to the business and the community.''

It brought people in, it gave them employment in all kinds of industries, like trades and services, and they became involved in groups, schools, halls and sports.

''Our grandchildren are so advantaged ... there are 12 different nationalities at their school,'' he said.

The challenge has often been to get city-dwellers to understand the implications of some of the decisions regulators impose, Mrs Murphy said.

But the Murphys have never been about development at all costs. Repeatedly, conversations turn to careful use of water and safeguarding and enhancing the environment.

Initially, the farm was predominantly irrigated by contour border dykes, ''not a very efficient way of irrigating,'' Mr Murphy said.

They began ''playing around with water efficiency'', drew up their own environmental farm plan in 1986 and made changes - their system is now fully laser-levelled, wide-border.

There was a convincing argument for the environmental benefits of well-managed border dykes despite the system falling from favour, he said.

But environmental regulations pushing spray irrigation as a preferred option might make it difficult to continue with the system.

However, Mr Murphy was confident the comprehensive data now being collected by users and scientists would allow people to make the best calls on new technology.

In his various roles he is fully involved with water users, putting in place strategies to continue to modernise, monitor and adapt water use and protect quality, to meet ever more stringent regulation.

So, looking to the future, the biggest, ''not insurmountable'', hurdle would be environmental questions around land-use. Another question was raised by the trend towards housing cows and how that fitted with ''free-range'', Mrs Murphy said.

''We need to hand on to our children the belief they can be proud to be in agriculture, to produce food, to feed the world.''

And dairying was a most efficient way of turning grass into food, Mr Murphy said.