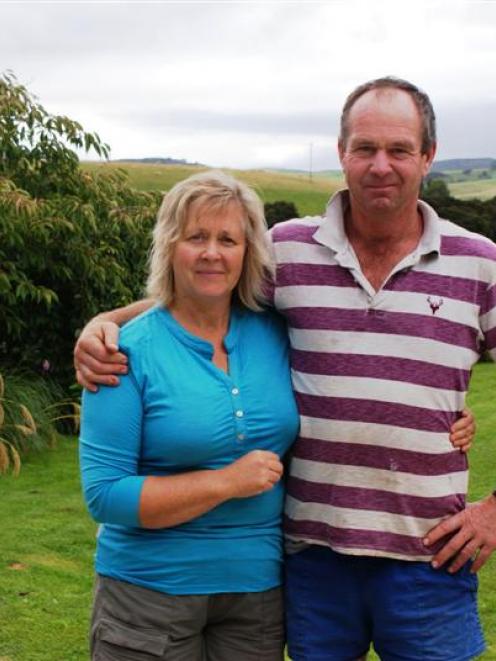 South Island Husqvarna farm forester of the year winners Pam and Graham Hunter at home on their farm. Photo by Neil Cullen.
Ask Graham Hunter how many trees he has planted through the years and there is a pause.

Because, with about 40ha in forestry on the property he farms with wife Pam, 20km from Lawrence, along with 5km of shelterbelts, not to mention all the trees planted on their previous farm, the answer is literally ''thousands and thousands''.

Mr and Mrs Hunter were named the South Island Husqvarna farm forester of the year at the New Zealand Farm Forestry Association's conference in Whangarei.

The couple, who are organic sheep and beef farmers, farm at Kononi, north of Tuapeka Mouth on the east side of the Clutha River.

Their reasons for getting into farm forestry initially were threefold: they wanted another income stream, wanted to provide shelter for themselves and their livestock, and they also enjoyed trees, Mr Hunter said.

Farm forestry was a great thing for experimenting ''and doing your own thing and seeing what works'', he said.

Mr Hunter has been involved with the South Otago branch of the Farm Forestry Association for many years, saying it was a way of ''putting something back into the community''.

He recently completed a two year term as president after 14 years as secretary, in his more than 20 years as a committee member.

Being involved with the association was a great way to see New Zealand and he enjoyed seeing parts of Northland during this year's conference.

He was ''blown away'' when the couple were presented with the South Island farm forester of the year award.

The judging criteria included personal effort in tree planting and results, service to community and advice given, depth and spread of knowledge, and service to the Farm Forestry Association.

Fellow South Otago branch member and former South Island Husqvarna farm forester of the year winner Neil Cullen said the progress that had been made on the Hunters' farm in less than two decades was testament to the couple's hard work and sound judgement.

They had planted trees wisely and imaginatively to enhance their farm and future income and had provided a ''great example'' of good land use, Mr Cullen said.