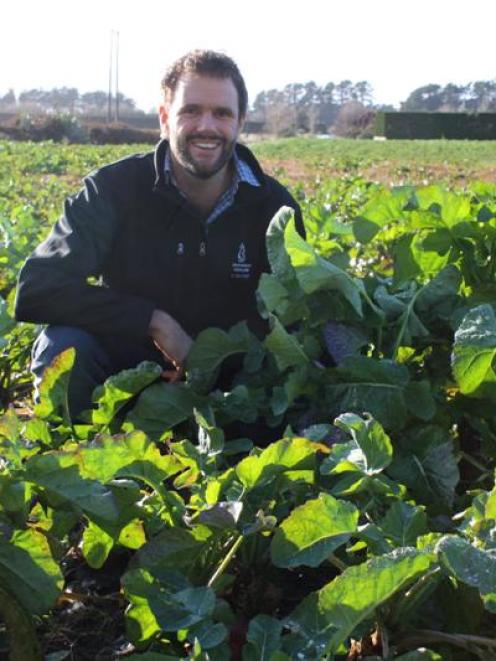 Environment Southland soil and science programme co-ordinator George Ledgard inspects a crop of swedes at Makarewa, near Invercargill. Photo by Allison Beckham.
Environment Southland staff are assessing the most cost-effective way to map land planted in winter forage crops using satellite imagery, after a pilot study last year showed the most accurate method was also the most expensive.

The council wanted to map the extent of crops such as kale and swedes, the use of which was known to lift levels of soil contaminants including nitrogen, phosphorous, sediment and E.coli, council soil and science programme co-ordinator George Ledgard said.

Satellite mapping would help the council understand how many hectares of winter crops were being grown and improve nutrient loss estimates at a catchment and regional scale, he said.

That information would feed into the council's Water and Land 2020 project - the council's response to the National Policy Statement for Fresh Water - which requires regional councils to set catchment water quality limits.

Most of the contamination occurred when crops were grazed by a high concentration of stock, he said. Grazing could also leave ''puggy paddocks'' which during periods of heavy rainfall could lead to sediment-laden water flowing overland into nearby waterways.

Recent research by AgResearch showed winter forage crops could leach more than 60kg of nitrate and 5500kg of suspended solids per hectare per year.

''Being able to map more accurately will make our science more robust and will give us a better understanding of the winter forage crop landscape.''

Last year, the council hired Landcare Research to carry out a pilot satellite imagery mapping project over about 800sq km in the Gore/Mataura/Edendale/Hokonui Hills area.

Mr Ledgard would not disclose the cost of the project, saying it was commercially sensitive.

Free satellite imaging such as Google Earth and LandSat was used in the trial, as well as high-resolution satellite imagery the council had to pay for.

All the systems could map crops but some were better. The best results were from multiple images of the same land but that was also the most expensive and technically challenging option.

''The next step in this project is to test the relative difference in accuracy between the methods and decide on the method most suitable for our needs.''

One of the issues was how best to map hilly land with paddocks shaded by terrain, he said.

Mr Ledgard said mapping would only ever be used as a ''snapshot in time'' analysis and at this stage he believed the free imaging available would be sufficient.

''We are looking for an overview, and I don't believe the cost of using high-resolution imagery can be justified.''