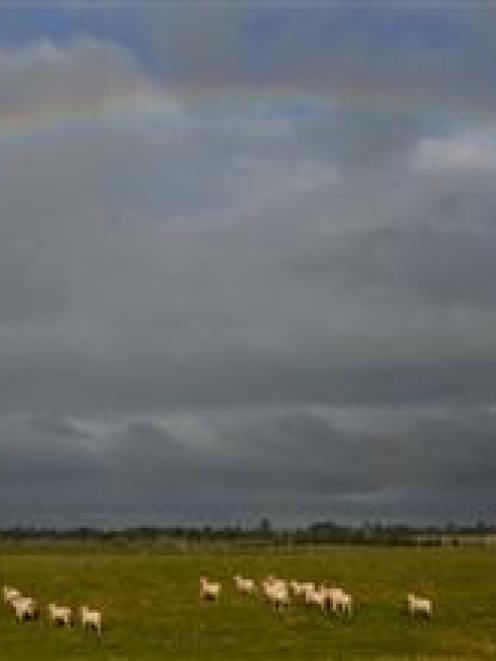 Last spring's storm in Otago and Southland caused a huge drop in lamb numbers. Pictured are sheep grazing, north of Herbert, recently. Photo by Peter McIntosh.
While a significant lift is expected in the number of lambs born this year, it will take "years" to get back to previous levels, New Zealand Meat Workers Union Otago-Southland secretary Gary Davis says.

Lamb production in the South Island - nearly three-quarters through the meat export year - is running 11% behind last year.

Given the "awful" spring last year, including a storm which claimed a million lambs on Otago and Southland farms, it was about where it was expected to be, Beef and Lamb New Zealand's economic service executive director, Rob Davison, said.

The "real unknown", particularly in the North Island, was what the lamb kill would be in the September quarter, Mr Davison said.

The Alliance Group's Lorneville plant has shut for the season, which livestock general manager Murray Behrent attributed to two factors: the lack of lambs after the storm, and store lamb prices.

Instead of holding on to lambs to kill them, farmers had taken the high store lamb price and sent them north to Canterbury farmers. The number of lambs sent north had probably doubled, he said.

While it was a shame for meat workers, Lorneville's closure was probably only a week earlier than usual, Mr Behrent said.

It had been a year that was unusual. Meat Workers Union members had had one of the shortest seasons on record and Mr Davis said he felt for those people who had not had a job this year.

"It's bloody tough for them."

While the union had been working with the Ministry for Social Development to try to find jobs for meat workers finishing their seasons early, the Christchurch earthquakes had meant resources had been based there.

Managing director Willem Sandberg said a drop of more than 50% in the national lamb kill during the past 25 years meant there were no longer enough lamb carcasses to keep economic throughputs at the Hawkes Bay plant.

Mr Davis was not surprised by the announcement, saying there was much overcapacity in the industry.

Average slaughter weights to date in the South Island were 0.5kg ahead of last year, with an average of about 18.1kg - up 3% on last year. That was a reflection of the "tremendous" season and fewer lambs around to finish, Mr Davison said.

Good pasture conditions at autumn mating and assumed average conditions at lambing should see a significant lift in lambs born this year, the Ministry of Agriculture and Forestry's recent situation and outlook report said.

Beyond this year, lamb production was expected to increase slowly. Sheep breeding numbers would continue to decline as a result of competing land uses, but productivity in terms of lambs born per mated animal and average lamb carcass weights were both expected to increase.

Lamb export revenue for the year ending June 30 was estimated at $2.7 billion, up 9.7% on the previous year, as increased international prices overwhelm the effects of an appreciated New Zealand dollar and a 9.9% decrease in export volume.

International lamb prices were expected to increase slowly as sheep numbers continued to decline in the EU, and rising numbers of people with moderate-to-high incomes created greater demand for lamb imports, particularly in the oil-exporting countries of the Middle East and in China.

The demand for higher-priced chilled lamb products was expected to increase at the expense of frozen products, particularly in developed countries.

By 2015, export revenue was projected to increase to $3.7 billion, reflecting rising productivity over the outlook period and exchange-rate depreciation in later years.

Prime lamb prices broke through the $200 mark at the Waiareka stock sale in Oamaru earlier this month, with a pen of Dorset Down-cross lambs selling for $201 a head, while prices in Canterbury have been even higher.

Those who had attended the Waiareka sale for many years believed it was a record at the sale. Butchers' ewes had been fetching more than $180 which was "pretty outstanding", PGG Wrightson North Otago livestock manager Mark Yeates said.

The lamb market was fully firm and he expected it to possibly rise a bit more as it headed towards the traditional lower supply period into the spring. The mutton market was very sound and firm, both export and domestic.

Farmers had good feed reserves which had also probably kept the stock flow at a lower level, as there was no urgency to unload stock. They could sell when they wanted to, rather than when they were forced to.