Getting to grips with farm succession 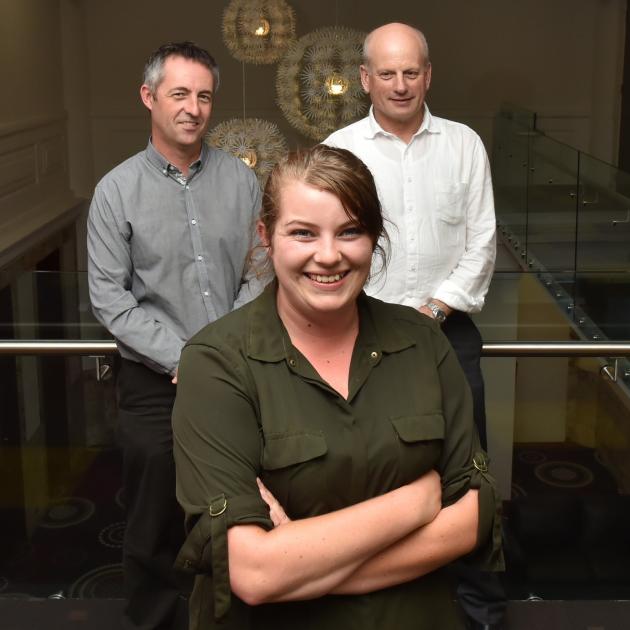 Otago Polytechnic student Ashley Hart has been working with AbacusBio consultants Simon Glennie (left) and Bruce McCorkindale on her research project about farm succession. Photo by Gregor Richardson.
Farm succession can be a complex and emotional subject for farming families.

Dunedin woman Ashley Hart (23) has compiled an information sheet for farmers for ''getting the basics right''.

And, as a result of her research, she has also scored a job at a local accounting firm.

Miss Hart grew up on a lifestyle block, surrounded by a farm, at Scroggs Hill, on the outskirts of Dunedin, and developed a love of farming at a young age.

After leaving Taieri College, she headed to Telford for two years, completing a certificate in agriculture and a diploma in rural business.

It was her time at Telford that opened her eyes to the different career paths available through agriculture, not just on the land. Prior to that, she wanted to be a sheep and beef farmer.

After Telford, she enrolled at Otago Polytechnic to study for a bachelor of applied management degree, majoring in accounting.

In her final year, Miss Hart had to complete an industry project, finding and working with a company and doing a research project.

Her father introduced her to AbacusBio managing director Anna Campbell, whom he knew through cricket.

AbacusBio farm consultants Simon Glennie and Bruce McCorkindale became involved, as ''facilitators and connectors'', and they ''tossed around a few ideas'' before contacting George Collier from Central Otago-based accounting firm ICL, and Craig Wyatt, from Harvie Green Wyatt in Dunedin.

It was Mr Collier that introduced the idea of investigating farm succession and that was the one they settled on.

The brief was basically to solve a problem for an organisation, although her project was probably a lot broader because it was industry based, Miss Hart said.

She spent time working with both Mr Collier in Alexandra and at Harvie Green Wyatt. She obtained contacts with real life examples of how farm succession worked in practice and was able to go and interview clients about their experiences.

It was a ''massive'' subject to initially get her head around and one that was very specific to each family and each property. The project ''sort of evolved'' as she went along, she said.

She particularly enjoyed interviewing people and hearing of their experiences, which helped her to understand what she was writing about.

She had also learned so much from Mr McCorkindale, Mr Glennie, Mr Wyatt and Mr Collier.

It had brought a whole new way of thinking about farming for her, not just what was happening on the land and in the business.

As well as completing a research report to meet her polytechnic requirements, she had also created what she hoped would be a useful resource for farmers. She was looking forward to it being released and getting feedback.

And, to top it off, she was offered a job at Harvie Green Wyatt and will start work at the firm next month.

Mr McCorkindale said the final output of Miss Hart's research publication was an easy-to-read publication for anyone starting and thinking about how to get started on succession.

There had been a ''gap in the marketplace'' and what she produced was a fabulous starting document for someone right at the start of the process.

Key questions outlined by Miss Hart were identify what you want to achieve, what will succession cost and how can you fund it.

Mr Glennie was thrilled that Miss Hart had secured a job, saying her passion and enthusiasm was evident and that was what employers were looking for.

Miss Hart was keen to continue to develop her thinking around farm succession. She would love to be able to advise people on the subject one day, she said.