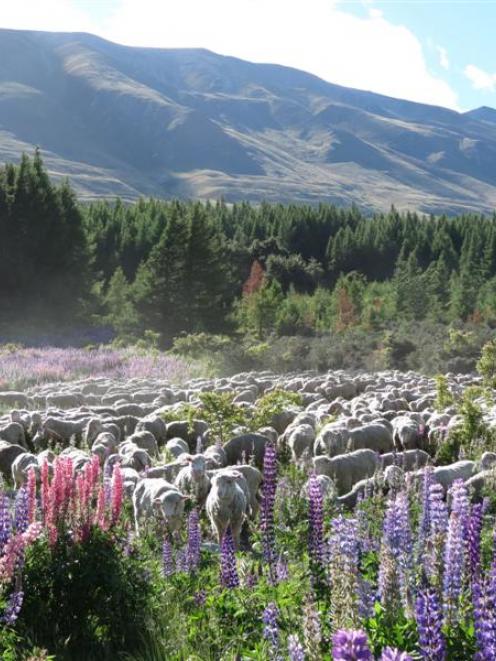 A management protocol is being prepared with the aim of gathering as much evidence as possible, both economic and environmental, so it was a ''one stop shop'' for lupins, Dr Ferguson said.

The colourful plants were first planted along roadsides in the Mackenzie Country in the 1940s, by Connie Scott of Godley Peaks Station. Her son, retired scientist David Scott, has long promoted the legume's potential as a fodder crop for sheep.

That would require good management practices being developed and followed. The lupin was a ''serious weed'', he said.

Public funds were already being spent controlling lupins in areas with high biodiversity values. However, their biodiversity protection pest status in the Canterbury Regional Pest Management Plan meant there were currently no restrictions on planting or requirements to control spread.

Dr Ferguson said farmers who chose to plant lupins were expected to avoid spread into threatened or fragile environments.

Research suggested spread was only likely near waterways. By following the protocol, farmers could realise the agronomic potential of the plant with minimal risk to the environment.

''We don't want to be seen to be environmental vandals.

''If it turns out that these plants will spread everywhere and threaten native habitat, that's not an outcome we want. No one wants to degrade their own environment,'' he said.

While there was ''lots of anecdotal stuff'', not much information had been proven about their spread, he said.

Those farmers who had grazed lupins were getting good results. Sheep were eating them and it was a quite high protein, good energy feed that became more palatable as the season went on.

Lupins could grow in low pH, high aluminium soils that no other legume could handle.

Some farmers had a class of land which was not providing an economic return and it gave them potential to do something different. It was also potentially a positive environmental impact by building soil ''and stopping the Mackenzie blowing away'', Dr Ferguson said.

There was a lot to be learnt around how to manage lupins optimally in terms of animal production.