Growth rates beefed up in a simple herd home 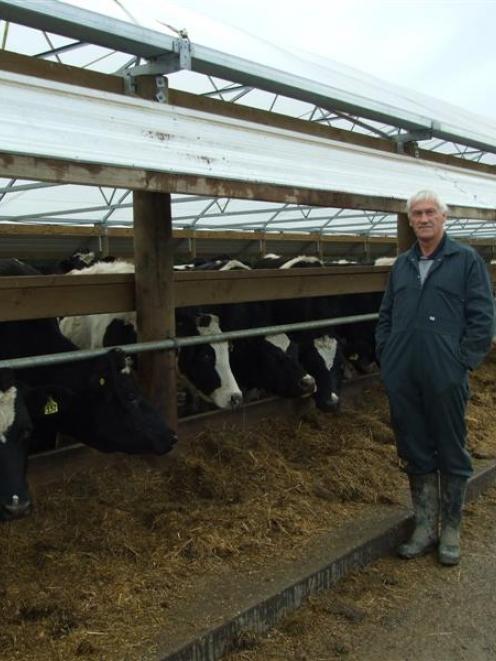 Mike Elliot stands in front of his beef cattle herd home. Photo by Helena de Reus.
When Mike Elliot could not get the growth rates he desired through winter to finish beef cattle - despite feeding as much as they wanted to eat - he looked for an alternative.

With an 88ha farm in South Otago, although about 11ha of that was in trees, it was a fairly small property and he needed to farm intensively.

But he had a "phobia" about making mud and there were also the increasing costs of planting crops and the amount of time and effort to feed cattle on those crops.

He was frustrated that he could not achieve the growth rates he wanted from winter crops and so he decided to install a herd home system.

With a desire "every now and then" to go on holiday, he wanted a one-man system that could easily be run by someone else if he was not at home.

The herd home was a reasonably simple structure, with a plastic roof. The effluent went through slats where the solids were contained in a bunker beneath, while the liquid filtered down to a pipe and was collected in an effluent pond.

The design was very simple and reasonably maintenance-free. The cattle were fed from the outside and it did not take long to feed them.

Benefits of wintering in a herd home included liveweight gains during winter, the ability to finish animals to receive premium prices in June-July-August, increased feed utilisation and improved soil condition due to having heavier animals off pasture during the wet winter months.

Fuel and tractor costs were also kept to a minimum.

The animals were very quiet and the biggest problem walking among them was "getting your face licked".

Mr Elliot, who frequently weighed the cattle, described himself as a "great fan" of electronic ear tags.

Those complaining about the introduction of the National Animal Identification and Tracing (Nait) system needed to "get their heads out of the sand" as there were a lot of benefits, he said.

Downsides of the herd home system included dags on animals, disease - especially contagious diseases like pink eye, and the cost of buying in feed.

It was much more cost-effective if you could produce the feed yourself, he said.

Discussing the potentialbenefits of alternative beef wintering systems, Jane Chrystal, of AgResearch, said the beef industry could learn from the research happening in the dairy sector.