Humble potato one to watch 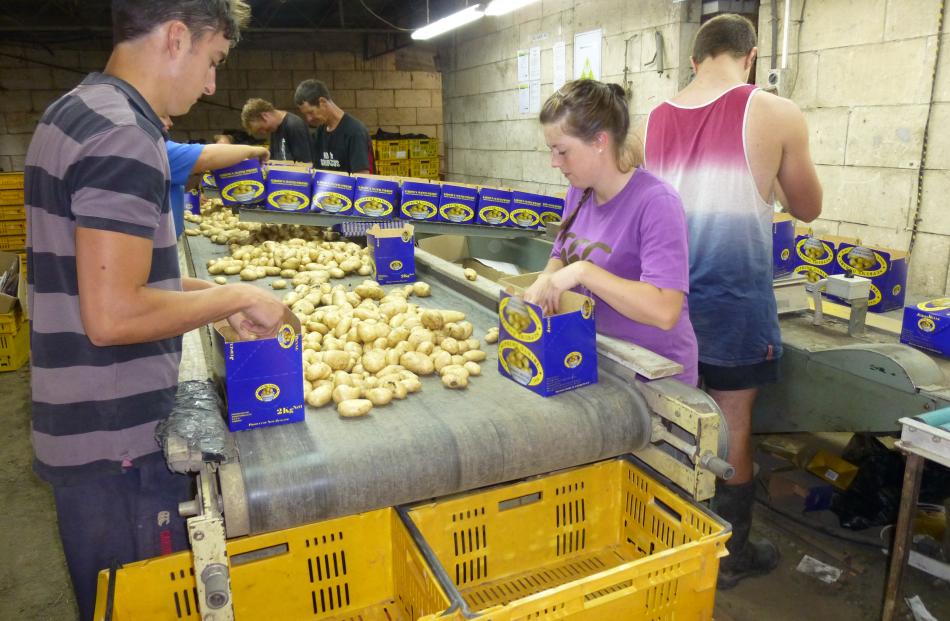 Armstrong and Co employees Patrick Perniskie (left), of Reidston, and Sam Macdonald, of Herbert, grade Jersey Benne potatoes for the Oamaru market. Although the crop for the ...

The news is all good for potatoes.

The unassuming tuber has been not only named New Zealand's top vegetable but has also been singled out by ANZ economists as an ''unappreciated'' or unacknowledged'' sector to watch.

In this month's ANZ Agri Focus its economists have written about several ''themes'' they consider will influence the economy through 2014 and beyond.

Among the several ''unacknowledged legs of the New Zealand Story'' which they say have the potential to contribute to and underpin the New Zealand growth story is the potato sector.

Specifically they have given the sector's new strategy - ratified last September - the big tick for its goals and the way it plans to contribute to the strategy of its umbrella group HortNZ.

If ''successfully executed'' - by playing to its traditional strengths, making improvements driven by sound research and development, developing better marketing programmes - these kinds of goals will drive growth, they say.

ANZ rural economist Con Williams said this was an example of how smaller sectors could build on their strengths to ''transition, grow and improve'' balance sheets.

''Individually these sectors may be small at present, but together they add up and, combined with faster growth, matter.''

Potatoes New Zealand chief executive Champak Mehta said the potato industry was firmly behind HortNZ's plan to double the horticulture industry's value to $10 billion by 2020 and through that contribute to the Government's goal of doubling agriculture sector exports by 2025.

''All the stars are aligning to capitalise on the growing visibility of the potato industry,'' Mr Mehta said.

This would be achieved through initiatives set out in the new strategy and in ''fundamental areas'' such as research and development, marketing and export development.

In April, Potatoes New Zealand will begin a partnership with the Foundation for Arable Research (Far) which is designed to lift the sector's R&D ''horizon'' to a more strategic level, Mr Mehta said.

''By combining resources, we can work together to answer the `big picture' questions that we feel will provide the next step in reaching our growth aspirations.''

Irrigation was ''a cornerstone'' of the plan to increase profit from productivity.

Mr Mehta said increased irrigation, especially in the South Island, has had ''readily evident'' spin-offs for growers and the industry in general, with an increase in productivity.

There were challenges in increased costs in time and money to meet compliance requirements, the uncertainty of long-term water rights, greater competition for water and the increased cost of land because of competing land uses.

''What this has meant is that potato farmers have had to take a hard-nosed commercial approach to what other crop types and, indeed, other farming systems they employ in conjunction with their potato crops to optimise their return on investment.''

Their experience underscored the necessity across the agricultural sector to continually improve to remain competitive, he said.

''We were thrilled at being named New Zealand's most popular vegetable in the latest Household Economic Survey.''

It showed Kiwis loved their potatoes and valued them for providing healthy, delicious, affordable and easy-to-prepare meals.

Despite its being a ''rising star'', Mr Mehta said, the potato's true benefits - its health benefits, its convenience and versatility - were still not fully appreciated by consumers or health professionals and the industry planned to do more to raise awareness.

Traditionally, the main focus of the potato sector had been the domestic market but it planned to explore further export market opportunities.

There were constraints to fresh potato exports, particularly phytosanitary requirements, he said.

Fiji was New Zealand's largest fresh potato export market, but was ''mature and not increasing''.

It wanted to explore further direct fresh potato export options to the Australian market and a variety of key Southeast Asian markets, he said.

Australia was the biggest market for processed exports but the industry was working to gain better market access into Southeast Asia, he said.

''We have substantial challenges ahead but now feel confident that we have the structures in place to pursue our strategic plan and achieve our growth aspirations as an industry.''

Overall the new strategy should provide all growers, large and small, with new opportunities.

By doubling export growth by 2020 larger scale growers would have opportunities to focus their attention on markets off shore, he said.

The newly formulated marketing plan was heavily focused on increasing domestic consumption and growth by 50% by 2020.

This would give smaller growers more opportunities within the domestic market, Mr Mehta said.